When my brother-in-law saw my tweet that I’d bought 6 cans of pumpkin puree that I didn’t have a use for, he almost immediately emailed me a soup recipe.  As should be clear by now, I love making and eating soup.  Soup + pumpkin could very well be my perfect meal (at least this week).  So far I’ve made 2 vegetarian, pumpkin-y soups.

The recipe my brother-in-law sent me, which I’d had at my mother-in-law’s house, is a Bobby Flay recipe: Mesa Grill’s Pumpkin Soup with Mexican Cinnamon Creme Fraiche. 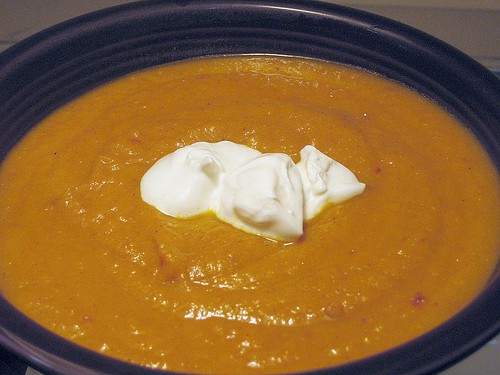 Spicy, vegetarian and satisfying, this soup is really good.  It’s thick and filling.  It tastes like fall (you know what I mean).

Despite the deliciousness of the soup, there are a couple things that annoy me about it.  First, you make stock using onion, garlic, carrots, celery and water (tip: reduce water to 3 cups!)  I know a lot of people make stock regularly and those ingredients aren’t that expensive, but it seems a waste to me to throw all the vegetables out.  This from the girl who likes her stock from a jar.  I just need to get used to it I guess. That said, it is easy to do.

The other thing that annoys me about this soup is that it requires 2 teaspoons of chipotle puree.  As a substitute, we (myself, Brian’s brother, and Brian’s mother) use 3/4 teaspoon of canned chipotles in adobo, pureed.  Unfortunately, this will leave you with almost an entire can of chiptoles leftover.  They’re in my freezer.  Someday I might use them up, but it’ll be a while-they’re spicy!

Despite those minor annoyances, this soup’s well worth trying out.

That was the first week.  Last week (I’m a little behind on posting), with our Apple Barn apples, I made Curried Pumpkin and Apple Soup from ZestyCook.  I know, it looks almost the same.  But it’s not! 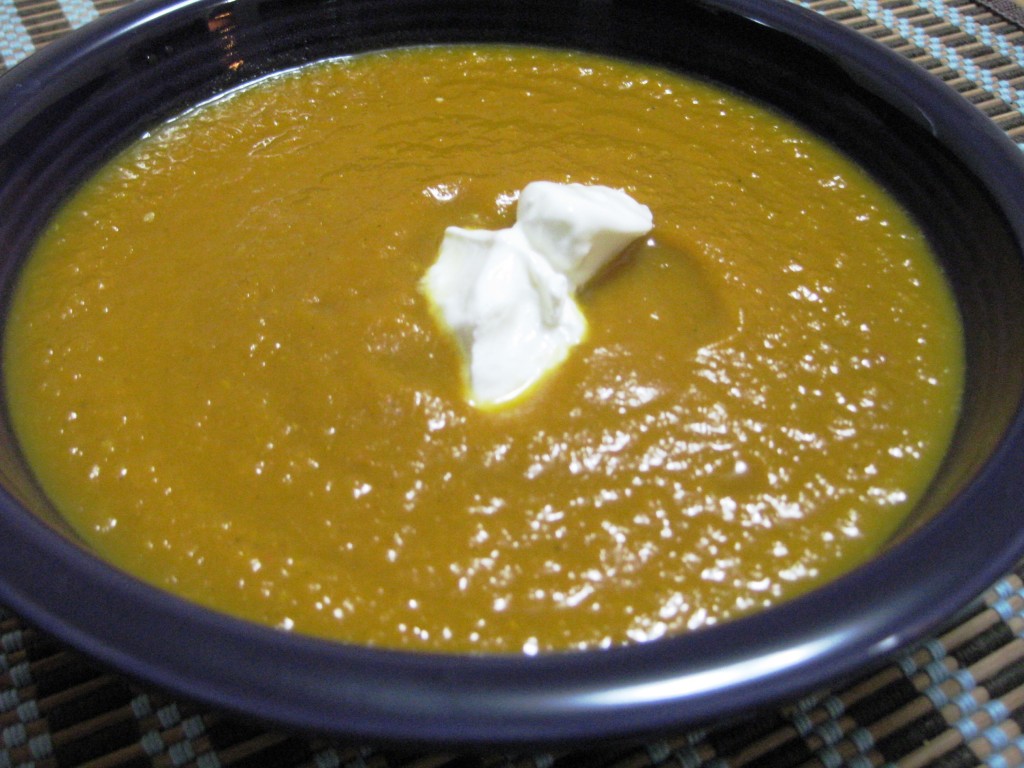 Apples and pumpkin…can it get any better?  We really liked this soup, possibly better than Bobby Flay’s.  Unfortunately, it had too much cayenne for us (and we do like spicy food!).  Next time I’ll use less and individuals can season to taste because the spice overpowered the rest of the dish.  Thank goodness for sour cream, which dramatically reduced the spice and made the soup much more enjoyable.  The tartness of the apples mixed with the sweet, creamy pumpkin was really a genius idea.  The recipe is also one of those wonderful, rare occurrences when I had all of the ingredients on hand.

As I learned a few weeks ago with my Tomato and Fennel Soup, make sure you’re careful when pureeing the soup in the food processor or blender.  This time I left the processing to Brian and we did not find ourselves with burns or a kitchen covered in soup.  Success!

I’m still obsessed, so check back for pumpkin pasta, chili and more!

Highlights: Vegan/Vegetarian
I Think My Family Might Disown Me (and other resol...
Rearranging My Routine
Chaos and Panera Soup
Did you enjoy this post? Share it!
« Pumpkin Obsession: Muffins
Pumpkin Obsession: Pasta Sauce »