Somehow, despite the fact that I’m still not working, life got kinda crazy last week.  Also, I’m sometimes a really lazy blogger.  I could write a whole post about that.  But I won’t.

Even when I’m not posting, I am cooking.  Here’s a brief look at what went down in my kitchen last week.

I never used to be a big fan of baking.  Yes, I frequently made cookies and brownies and such, often from a mix, for my debate team kids, but I was often unhappy with the way they turned out.  Suddenly I’m very into baking, which is fun but less than helpful when I really should be focusing on dinner.  It would’ve been all okay last week if Smitten Kitchen hadn’t posted an incredibly tempting recipe for snickerdoodles.  They looked too good.  I had to make them.  I’ve never even made snickerdoodles before…but I had to make these.  (Poor Brian…he has to come home after work to hear my ramblings about why I *had* to make cookies…not that he’s complaining) 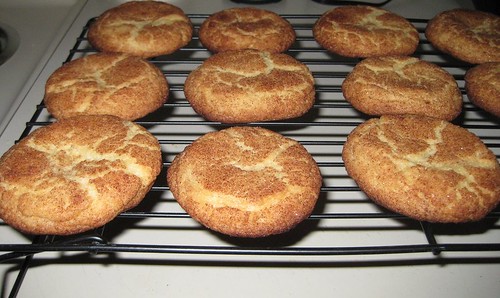 They were “totally awesome” (if you’re my sister, you’ll get that. Otherwise, I’m sorry).  I would make more this week, but I have other plans for my oven.  Highly, highly recommended.

Another Rachael Ray recipe, I made some substitutions to her Spicy Bean and Cheese Burritos.  I subbed vegetable broth for beer, because I’m too cheap to go buy beer just for one recipe.  I also used canned chopped chilies instead of pickled jalapeños.  The resulting burrito filling was this: 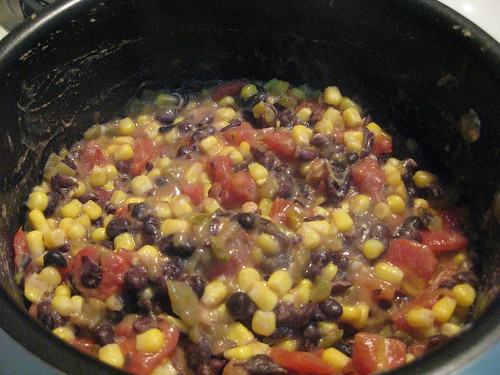 Definitely not bad, though not very spicy.  We put the filling and cheese into whole wheat tortillas and attempted cooking them on my George Foreman grill. 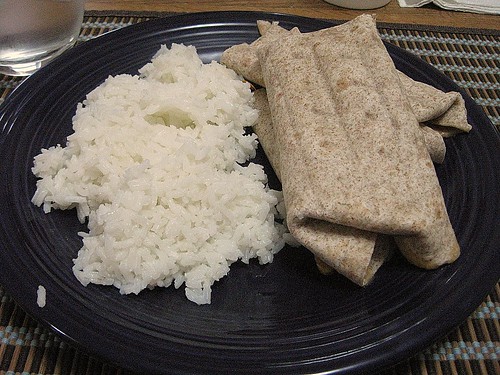 Final analysis: The burritos were fine, though would’ve benefited from a bit more spice and crunchier tortillas.  The lack of crunch was probably my fault and next time I’ll try cooking them in a skillet.  However, Brian and I were fans of the whole wheat tortillas, which we’d never had before, so those will definitely reappear on a future shopping list.

This week, be prepared for recipes that involve baking and apples.  Brian and I went apple picking on Saturday :)