Last week was the final week (I hope) of last minute menu planning and food shopping.  I decided to make a recipe without reading it through and, as a result, found it to be less than I’d hoped for.

The recipe, Mac ‘n’ Goat Cheese, is from Everyday with Rachael Ray.  I liked it because it’s simple and includes some of my favorite ingredients: pasta, garlic, cherry tomatoes, spinach, cheese (we replaced the goat cheese with feta) and walnuts.   Plus it was vegetarian and I really need to work towards deliberately planning vegetarian meals.   Now, before I shower Rachael with criticism, I must confess that I didn’t follow the directions completely.  I cooked a pound of pasta (because I hate having a box with just a little bit of pasta in it!) but I neglected to increase all the other ingredients.

The dish came out fine otherwise however, and since we had tons of leftovers, I cooked up more spinach and garlic for the second night and added it in.  The problem with this “Mac ‘n’ Cheese” is that it isn’t really mac and cheese…it’s more like pasta salad.  The dish never gets baked (despite the misleading picture of the macaroni in a baking dish in the magazine) so the cheese doesn’t melt, and there’s nothing crunchy.  For a pasta salad, it was good.  But I wanted to make mac ‘n’ cheese.  In fact, my Man and I ate the leftovers cold. Granted, if I’d read the recipe all the way through before cooking it, I would’ve know this. 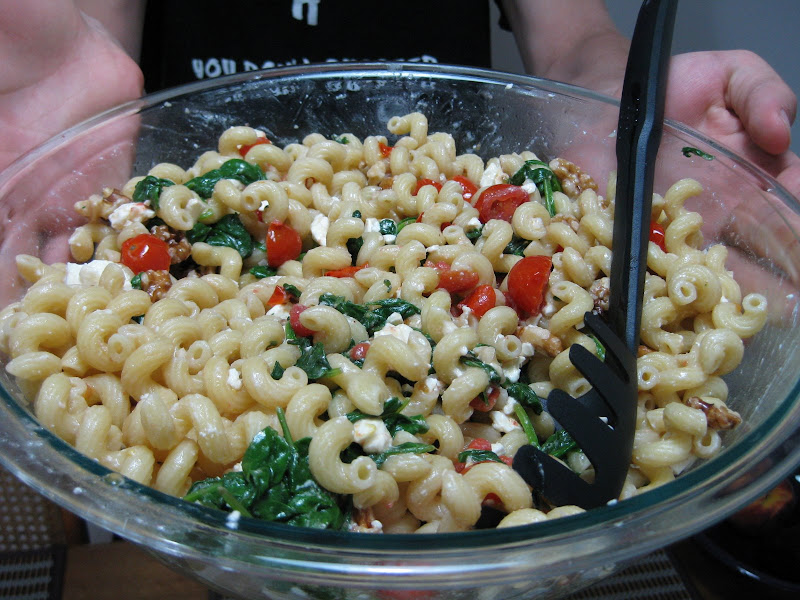 If I wanted to make this pasta salad again, I’d probably increase the amount of garlic, cheese, nuts and especially tomatoes and spinach even further.  I think a few sliced black olives would be a nice addition as well.  I’d also switch out the pasta for whole wheat pasta, which would leave me feeling less guilty for eating the same meal for dinner three nights in a row.  If you’re craving really good mac ‘n’ cheese instead of pasta salad though I would definitely re-recommend Cheese Lovers 5 Cheese Mac and Cheese.

Potato Pancakes
Early Fall Vegetable Bake
Things My Man and I Disagreed On While Making Dinn...
Recent Culinary Adventures
Did you enjoy this post? Share it!
« Updates and Confessions
Gazpacho is Love »