The discovery that August’s grain of the month was rye was certainly a relief.  Though I’d never worked with rye flour before, I knew I liked it, I was pretty sure I’d be able to find it and I knew what I could do with it. Much better than driving all over looking for amaranth or teff and then trying to work with it.  I knew I wanted to make rye bread. 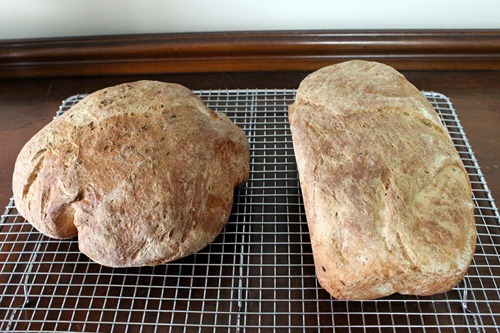 For my first attempt, I followed a recipe from Serious Eats for The Bread Bible’s Seeded Dill Rye.  Even though I’d never made rye bread before, I’m pretty comfortable with the general bread baking routine.  I skipped the instant nonfat dried milk, but used a cup and a half of milk instead of the additional water, which seemed to work fine.  Otherwise the recipe was easy to follow. I only have one loaf pan (how is that possible?) so I baked the second loaf free-form on a baking sheet, which worked perfectly.  The dill flavor isn’t as a pronounced as I might like, but the bread texture and flavor were very good. 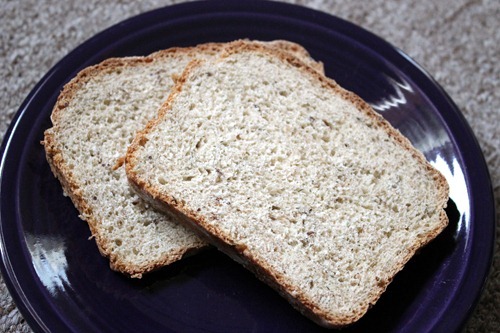 I decided to try something more complex for my second variety of rye bread, so I made Smitten Kitchen’s New York Deli Rye Bread.  It did take all of the 8 hours she promised, but the majority of that time was just waiting for the bread to rise.  By the time I put it in the oven I was pretty nervous that the bread wasn’t going to turn out; what would be worse than spending a whole day on a recipe only to have it fail?  My dough seemed to be flattening out more than it should (I think it spent too long rising during the second phase), but I baked it anyway. 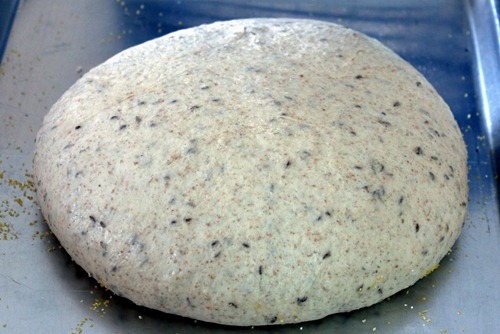 But in the end it turned out well, though a little less round than would be perfect.  Even though the recipe produced a great loaf of rye bread, I don’t expect to be making it again.  For the sake of my time, the Serious Eats recipe was just as satisfying (and it made 2 loaves!).  I just don’t have entire days available for bread baking. 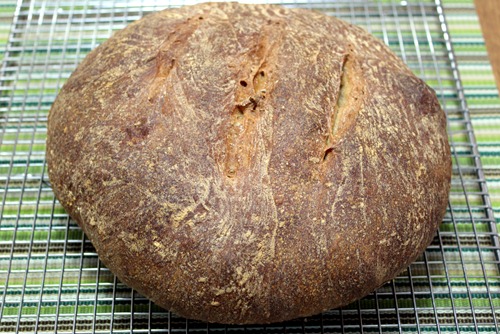 Still I found myself with a beautiful loaf of bread and decided I needed to do just a bit more with it.  A quick trip to the supermarket for ingredients resulted in perfect, crispy, wonderful Reuben sandwiches, made in the George Foreman grill. 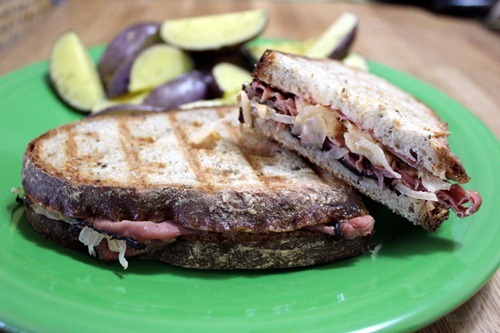 It’s possible that this month was one of my favorite’s yet.  I love baking bread and every time I do so I wonder why I don’t bake more often.  It requires a bit of time, but it’s certainly worth it and really not that hard, especially when you let the KitchenAid mixer do all the kneading.  We’ll see if this fall allows me to spend more time baking.

September is the final month in my grain of the month calendar challenge.  It’s hard to believe I’m almost done with this project.  The grain is rice and wild rice, which I’m really looking forward to trying.

Satisfying Minestrone Soup and Amazing Biscuits
Wearing Green and Eating Beef
Lasagna So Good I Can’t Believe I Made It
Sometimes I Surprise Myself
Did you enjoy this post? Share it!
« HLS: Thoughts a Week Later
The Best of the Worst Summer Ever »