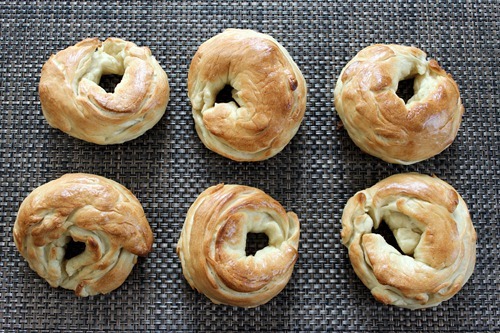 April break, obviously, provides me with a lot of free time.  I decided yesterday that some sort of kitchen mini-project would be a perfectly acceptable way to spend that time and it wasn’t long before I settled on bagels.  I have this recipe that Rachel Wilkerson shared a million years ago (also known as 2009) that I’ve been debating trying since its original posting.

The bagel recipe looked fairly straightforward, basically bread + poaching.  I combined the ingredients, all of which I had on hand thanks to my recent bread baking habit, and had my stand mixer knead them for 10 minutes, as Rachel suggested.  After allowing the dough to rise, I set out to shape my bagels.

For some silly reason, I believed that, despite Rachel’s photos, I could make pretty bagels.  I have plenty of baking experience, how hard could it be?  All I had to do was “Roll each piece between the palms of your hands into a ball, and then roll into another rope, curling it around to form a ring.”  But this was no ordinary dough.  This was the hardest dough I had ever worked with.  I seriously struggled to form each piece of dough into a rope and then a ring.  It occurred to me when I’d completed 4 bagels (and I really wish I’d timed how long that took me) that I could’ve made bagel sticks or twists and maybe saved myself some trouble.

All the hard work made me wonder if the bagels were actually going to turn out alright.  But I poached them and cooked them at 500 degrees for 10 minutes.  Despite their unevenness, they still looked rather like bagels. 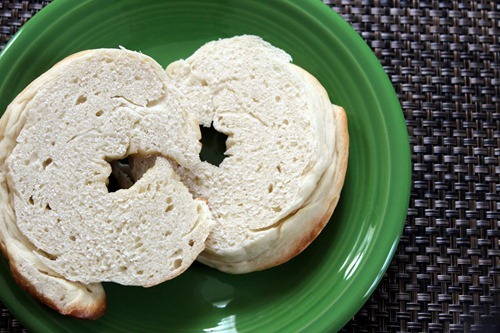 This morning we discovered that they taste like bagels too.  They’re dense and chewy and really good.  After I finished eating my first, I almost went immediately for a second bagel.  I’m not sure what the answer to resolving their rugged appearance is, but I’m also not sure I care.  This is one food where taste matters a lot more than appearance.

Highlights: Breakfast Inspiration
Adventures in Bread Baking: Wheat Sun-dried Tomato...
Rearranging My Routine
2 Recent Successes
Did you enjoy this post? Share it!
« My Most Recent Mini-Vacation
Highlights: The Most Useful »