I spent most of yesterday waiting for the power to go out, checking the weather forecasts and reading people’s Facebook updates.  Predictions were that Sandy was going to be worse than Irene and I was not looking forward to spending hours, or days, in the dark.  Not that the dark would be terrible, but I couldn’t bear the thought of throwing away the food in my fridge and freezer.

Sandy wasn’t supposed to hit western Massachusetts until around noon, so I decided to make one of this week’s dinner entrees for lunch, freeing us up to eat peanut butter sandwiches by candlelight for dinner, if necessary.  Brian had recently requested dumpling soup and, coincidentally, I had just seen this recipe for Roasted Vegetable Soup with Herb Dumplings on The Kitchn. 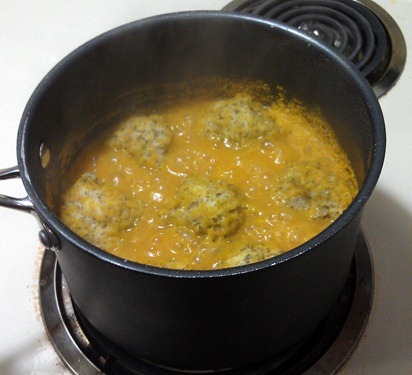 I have never made a dumpling soup before (I’m not even sure I’ve really eaten one), but the recipe ingredients seemed right up my alley.  I opted to make half a batch so that there wouldn’t be anything else to spoil in our refrigerator during the outage.  The roasting vegetables smelled amazing even before I turned them into puree.  The resulting broth was thick and super creamy.  Most nerve-wracking was the dumpling creation; it just doesn’t make sense to me to be putting dough into soup and I wasn’t sure it would work.  But it did work –resulting in soft, herby balls of bread that reminded me of these drop biscuits.  I was a pretty bad judge of size, next time I’ll work to make them smaller which I think will improve their texture and make them easier to eat.  This soup was definitely one of the best soups I’ve made in a while and I’ll be adding it to my list of recurring recipes.  I’d even eat it without the dumplings.  We quickly consumed the half batch of soup and I resumed my waiting for the power to go out, satisfied that we’d had a great lunch.

In the end, the storm didn’t hit the Berkshires too hard. Certainly, we got a lot of rain and strong winds. A few trees came down. Some people lost power, but we never did.  Clearly, my friends in New York and New Jersey did not fare as well.  Praying for a smooth recovery for all involved.