Welcome to the newly improved Relishments…where cooking actually happens! Today will hopefully be the first of many recipes and recipe reviews to follow.

In an effort to find new vegetarian recipes to try out, I picked up my husband’s (and I guess now my) copy of The Victory Garden Cookbook

by Marian Morash. The book is really useful because each chapter covers a different type of vegetable (everything from asparagus to turnips) and provides a wealth of background information about it ncluding yields, storage and hints.  And of course, there are recipes, centered around the vegetables.  I don’t know how I spent 6 weeks living with Brian without opening this cookbook.  It’s definitely going to be a go-to in my kitchen.

I decided to try making “Red, White and Blue-Black Eggplant”, based on the appetizing photo and the fact that I really like all of the ingredients.  By the time I was finished cooking, I’d made several alterations. 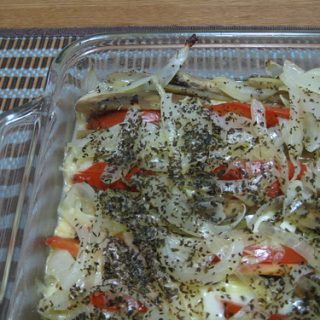 This recipe was a little less simple to make than I expected.  Besides the fact that the original recipe left me with a tomato and a half too much, it also seemed to require more dishes than should be necessary to create what is actually a pretty simple dish. It’s also a little messy to serve: 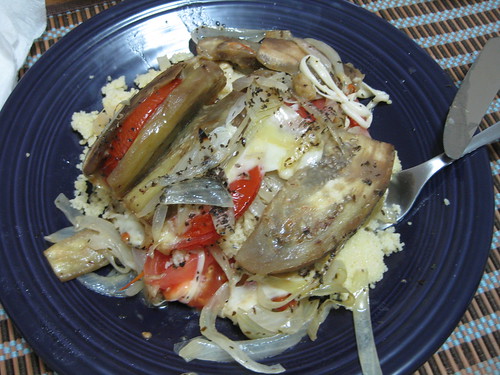 The end result was less pretty than the picture in the book (big surprise, I know) but tasted really good.  It was a mess to serve and at first it appeared that there was a lot of liquid in the bottom of the dish.  However, by the time we’d eaten the entire dish, the amount of juice it seemed more reasonable.  The cheese and basil really helped make the dish for me and the amount of baking time left the eggplant super soft.

Eggplant is one of those vegetables that I’m satisfied for a while after just one meal, but I’d certainly make it again.  This is a handy recipe to make for a group, just double the ingredients and use a 9×12 or larger pan.