Before we talk about this week, we need to talk about last week.  Last week’s menu plan happened to include two dishes I’d never made before and both of which were awesome.  If every week of menus I made was that successful, I’d be a happy woman.  Not that I’m unhappy…I guess I’d be happier.

The first recipe was Mark Bittman’s Braised Tofu with Eggplant and Shitakes.  There are no photos because it is not a pretty dish.  It’s sort of brown and mushy.  But it tasted amazing; savory with Asian flavors and a tiny bit of heat.  I was also pleased to discover that I could get more than a cup’s worth of shitakes (which I’d never worked with before) for less than a dollar at my supermarket.  The recipe, which was simple to make overall, produced 4 servings for us and I’ll definitely be making it again.  I thought it was great on its own, but Brian thought it needed a carb, so we enjoyed the second half of the dish over egg noodles.

I also had a highly successful pizza baking adventure.  I make pizza often, as regular readers may be aware, but this was the first time I’d tried adding whole wheat flour to my food processor dough and I was really pleased with the result.  I’m sure topping it with kielbasa and onions and cheese didn’t hurt either. 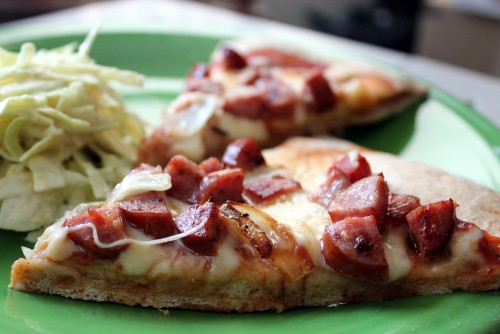 This week’s pick up 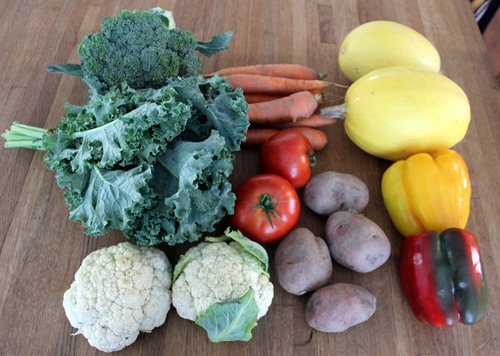 Apparently I was channeling last fall as I worked on this menu.  I was considering Ari’s spaghetti squash recipe when I found the vegetable and chickpea stew recipe in my Evernote collection and realized that I’d written about both of those recipes in October of last year.  In fact, I’ve only got one new (to me) recipe on the menu for this week.  Now that the school year’s in full swing, I’m trying to keep my stress level as low as possible; we’ll see how many of these dishes actually happen and how busy things really start to look as my classes get underway.

Greens, Greens and Greens (CSA Menu Plan #27)
You Win Some, You Lose Some
Why We’re Renewing Our CSA Membership for 20...
Goodbye February! (CSA Menu Plan #23 + 24)
Did you enjoy this post? Share it!
« Whole Wheat Food Processor Pizza Dough (in a hurry!)
Highlights: Back to School 2014 »