7 years ago, as a bachelor just starting out on his own, Brian didn’t see the point in getting cable television.  It’s expensive, he was a first year teacher and he had a computer with internet access.  Who needed cable?  At the same time, I was spending afternoons on my parents couch, watching hours and hours of Food Network.  Prior to our marriage, I expressed my concern about living without conventional television, especially since we live in an area that doesn’t really received signals via antenna.  But Brian encouraged me to give it a try and, after nearly 5 years of marriage, I’m happy to say I’ve found plenty of ways to  get my food entertainment fix.

The system isn’t perfect.  Sometime I have to wait months for episodes or seasons to become available.  Sometimes episodes of food reality shows never appear on my queue.  Sometimes things expire or disappear without notice.  But for the cost, I’m not complaining. 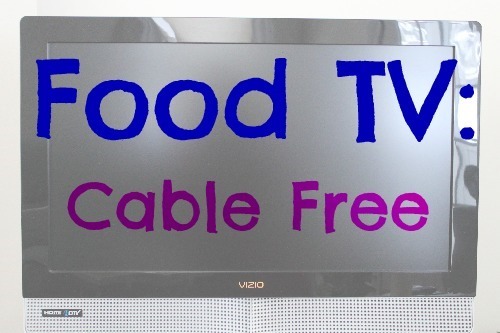 It seemed only fair to share some of the “free” food entertainment I’ve enjoyed without cable.  This is by no means an exhaustive list of everything available, but is a collection of some of the shows I’ve really enjoyed over the years.  As both Netflix and Hulu are easy to search, I’ve also left off links to the specific shows and I’ve decided not to comment here about how many episodes of each show are available and whether they are watchable on other devices, as those are subject to change regularly.

A Netflix streaming account is required to watch these shows.  As you probably know, what’s available on Netflix changes fairly often.  You can access these shows by searching or by going into the Television category and then clicking on Food & Travel

David Chang’s The Mind of a Chef

As with Netflix, the availability of these shows varies based on contracts and what shows’ seasons are currently active.  The entire collection of food shows available on Hulu can be viewed here.

Farmed and Dangerous (the new series from Chipotle)

Of course, there are a lot of places for food entertainment besides the previously listed big players.   Below are a few of my favorites, but I know there’s a lot more out there.  If you have a favorite food related video site or YouTube channel, please share in the comments!

PBS Food – including episodes of Julia Child: Cooking with Master Chefs and The Victory Garden

Did you enjoy this post? Share it!
« Highlights: Date Night & A Sponsor Shout Out
Recommended Recipe: 30 Minute Homemade Soft Pretzels »