The other night, Brian made dinner while I was out.  Since his last post was so well received, I suggested he write about it.  Enjoy!

In the last CSA pick up I encouraged Emily to grab a purple cabbage. At the time I had no idea what I was going to do, but Em was clearly not happy. On Wednesday I finally decided to make Big Miso Dinner Soup from the Food Network website. After a long day at school, making my own dinner was not a highlight, but I was intrigued to try out a few items I have not worked with before, such as the red miso.

Since the recipe sounded a bit off to my desired result, and I had a whole head of cabbage to use rather than the recommended 1/2, I made some changes as I executed the recipe and had several “duh moments” in which I learned some important lessons. First off, I really had a hard time figuring out that 8 ounces of liquid equals 1 cup (duh moment number one). Secondly, I decided to shred the cabbage, onion and a shallot (to replace the scallions).  I tend to have a volatile reaction to cooking with or cutting any onions, and figured the food processor would cut down on the time I spent handling these cry inducing root products. Shortly after touching the onion, however, I kept touching my eyes, causing severe eye irritation which encouraged more rubbing, which caused more burning (duh moment number two). Also, I forgot my basic knowledge of cabbages: when you shred them the amount of food they create appears to quadruple, which meant way more cabbage in my soup than I desired (duh moment number 3). Lastly, I had to peel an acorn squash, which was 10 times harder than a butternut squash. During which I decided to take about a quarter inch of skin from my lower knuckle where my wedding ring is, forgetting that I should probably work more slowly when handing a vegetable peeler (duh moment number 4). 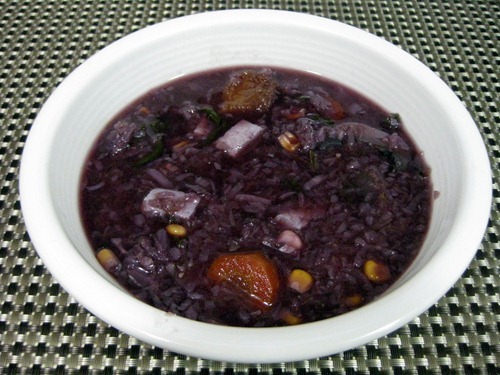 After the pain and confusion caused by my lack of familiarity with simple tasks (insert rant about measurements), I finally got to eat the soup. By this point the purple cabbage turned the corn to a ghostly grey-purple along with the tofu, mushrooms and just about everything else. The last time I had eaten food this purple was a grape Jolly Rancher and I am pretty sure that was over 7 years ago. Overall, after getting past the strange color the food tasted satisfactory, not great, but warm and good (oh by the way I burned my mouth while eating; duh moment number 5). Does it taste Asian-y? Yes. Do I want to eat it for the next decade, no. Will it freeze well? Probably not. Do I want to try to freeze it? Probably not because I would rather help Emily make pumpkin pie ice cream (keep your eyes out for that post possibly coming soon) and have that in the space the soup would take up.

Now to Emily for her thoughts about coming home to purple soup.

I was unhappy about the purple cabbage because I generally don’t like getting things from the farm that I have no idea what we’re going to do with them.  I’m not really sure we’re cabbage people; we rarely eat it.  So what in the world were we going to do with one?

I usually don’t feel like making dinner after a long day at school, so it was nice for someone else to do it for a change and relieve me of my duties.  I was taking a grad class that day so when I wandered into the apartment around 8 pm it was clear that cabbage had been cooking.  I wasn’t sure if I liked the smell or not, but I tried to focus on the fact that I hadn’t needed to cook.  I’d taken a peek at the recipe before work and noticed that it called for Savoy cabbage, not purple, but since Brian was so excited about using the cabbage I decided not to rain on his parade.

When I reached the kitchen it became apparent that Brian had made a lot of soup, probably 12 servings or so (which is funny, because the original recipe says it serves 2, so you’d expect a doubled recipe to serve 4).  There were purple spots in various places on the counter and the stove.  Once I got past the off-putting color, the soup wasn’t awful.  But, as Brian said, it wasn’t great either. It’s pretty one note and that note was generally shredded cabbage.  We’re still not sure if we’re going to keep all the soup that’s still in our fridge or just dump it (which I feel awful about), but I suppose we’ll have to make that decision soon.