It’s hard to believe that I’ve completed the last month of my Whole Grains Council inspired, self-imposed, Grain of the Month challenge.  It’s been fun and I’ve definitely tried a lot of new foods, but I’m looking forward to not running around searching for ingredients and then finding several ways to use them in order to satisfy my own challenge.

It’s also hard to believe that I only cooked 3 rice dishes in September, but a search through my cameras and the files on my computer is leading me to believe that’s all there is.  I’m pretty sure I made a couple other rice recipes with the intent of including them in this post, but between school starting and my sister’s wedding, my brain has been a little all over the place. 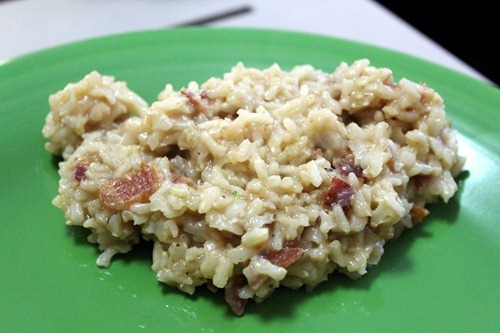 One recipe I did make and remembered to photograph was Savvy Eat’s Bacon Brown Rice Risotto.  This dish was awesome; since you cook the rice in the bacon fat all of the risotto has this great bacon flavor.  The recipe made a lot of rice so I was able to include it in a couple of lunches, which we somehow consumed without the shocked glances from our coworkers about our eating bacon (Brian and Emily eat meat! gasp!). 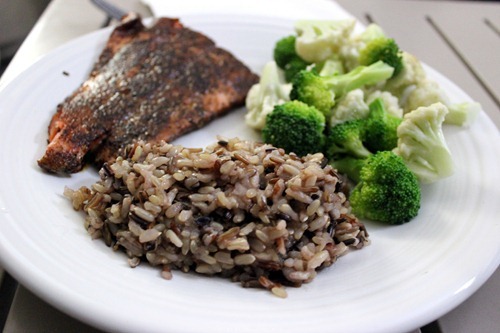 This month seemed like the perfect opportunity to try out some wild rice, which I’ve never made before.  I bought a bag of Lundberg Wild Blend Rice.  The rice was easy to prepare (as rice should be) and came out well according to package instructions.  I found the flavor to be a bit improved when I used broth as the cooking liquid for our second batch.  Overall, I still prefer brown or white rice, but I think I could get used to the stronger flavor of wild rice if I made it more often. 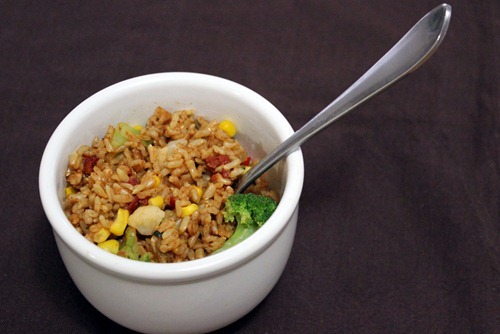 I also revisited my recipe for Baked Chili Brown Rice and Vegetables.  The original post does a pretty good job of explaining this dish; this time I made it as simply and quickly as possible by skipping steps 2 and 3 (cooking the onion with the spices).  Instead, I just dumped all the ingredients into the baking dish together and baked it.  The dish came out as good as ever, with a few less dishes to wash.

I don’t really feel like I did rice justice, but I’m glad I tried a couple new things.  I’m really glad I challenged myself to try all of the grains on the Whole Grain Council’s calendar (well, except for sorghum, which proved difficult to find)  I’ve found a few new favorites I might never have had the motivation to try otherwise; farro, rye and quinoa are definitely near the top of the list.

Mixed Success with Amaranth (May)

Thanks again to the Whole Grains Council for all the inspiration!