The pantry! – This space is still very much a work in progress, but I love it already.  Eventually I’d like to get nice looking floor to ceiling shelves, but for now it’s wonderful to have the microwave out of  the way and a place to store the items I don’t use on a regular basis.

This weekend, my husband and my dad made that dream a reality.  They finally installed the wire shelving I’d been eyeing and we’d been debating for months. 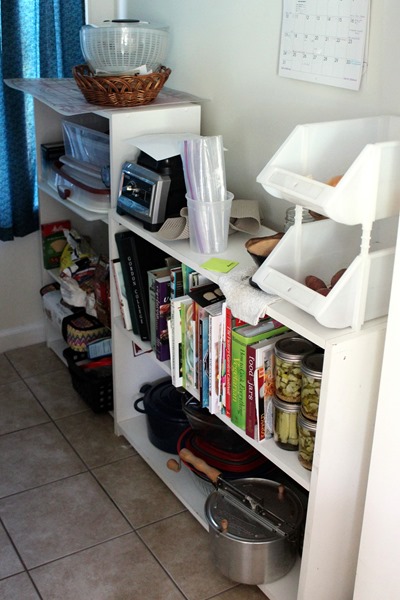 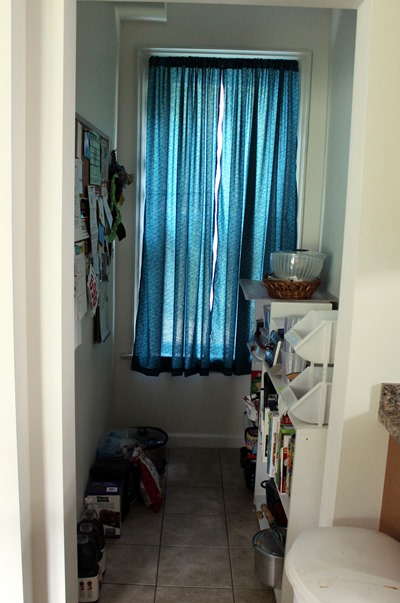 As a reminder, this is what my pantry used to look like.  It really wasn’t bad, but it seemed like we could do better than a pair of particleboard bookshelves I purchased at a yard sale years ago. 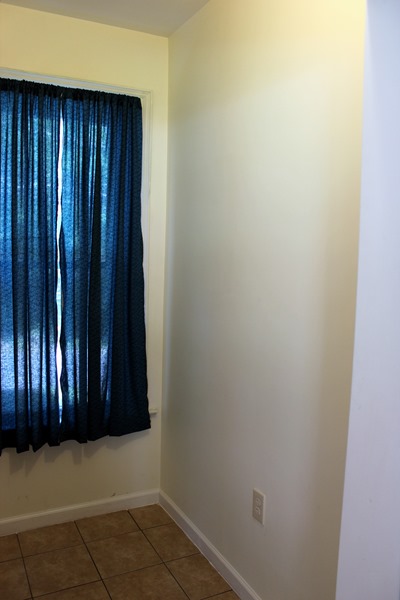 We purchased the ClosetMaid shelving from Home Depot.  Our pantry is about 67 inches long so we decided to get 5 shelves of 5 foot long, 16 inch deep, basic white ventilated shelves; this would leave us with a bit of a buffer on the sides.  Originally we were going to get the 12 inch depth, but decided after a last minute measurement to go for the extra 4 inches.  We also purchased hang tracks, four vertical tracks, twenty brackets, and 2 packages of caps for the ends of the wire shelves.  The lovely people at Home Depot cut down the 6 foot shelving to 5 feet for us, but were unable to cut the 80 inch hang track.  Because we weren’t sure we’d be able to cut down the 80 inch piece, we also purchased a 40-inch and 24-inch, just in case.  Before installation, we also purchased the recommended screws from a local hardware store.

You may have surmised, from the previous sentence, that this was not the least expensive project ever.  Each of the components was relatively inexpensive, but together they really added up.  This project cost us over $300.  But it was worth it. 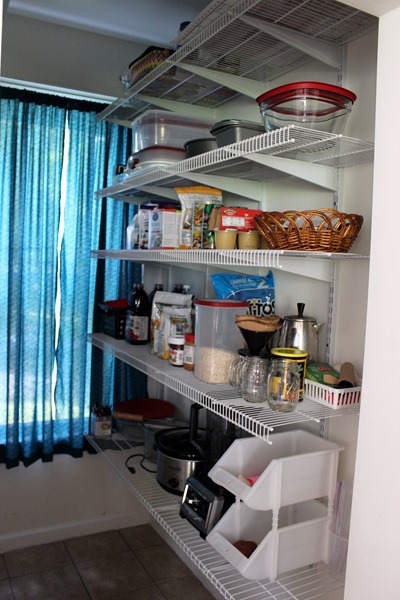 I confess:  I had very, very little to do with this pantry update.  I put in my requests to Brian, I accompanied him to the store, I helped removed all the items from the pantry before the project started, and I offered a little input as the work went on.  In fact, my mom and I took the opportunity to run some errands and explore town while the guys worked.  I do know that my dad used a jig saw with a metal cutting blade to shorten the 80 inch hang track; we’ll be returning the 2 shorter tracks we didn’t use.  Getting only 5 feet of shelving was a good decision; taking into account the window frame, there isn’t much gap on either side of the shelving. 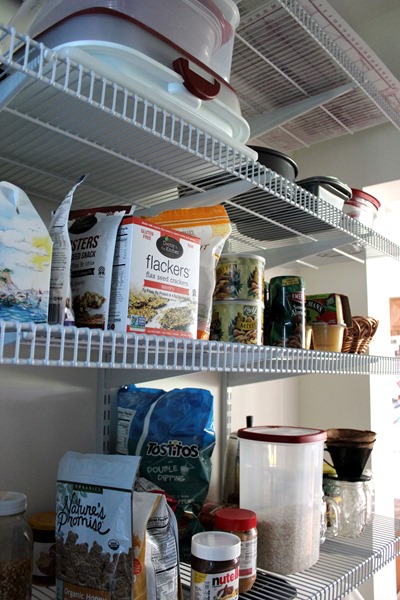 All in all, the project took my dad and Brian from mid-morning into mid-afternoon.  In addition to being more expensive than I expected, it was also more difficult.  Our old house with its possibly randomly placed studs and/or drywall over plaster apparently made it very difficult to determine where the studs were.  And it was really important to all involved that the hardware was installed as securely as possible.   I’d write more about the actual process, but like I said, I was absent for much of it.  A few extra holes were put into the wall, but most of them were covered by the hardware and the others aren’t noticeable.

In the end, I am very happy with my new pantry.  For one, it looks like a pantry.  I really like the look of the white wire shelving.  It’s clean and organized and now I have shelves from floor to ceiling.  I also have a lot more storage, which is always exciting.  We did a bit of rearranging in our kitchen and the pantry, though I’m not sure if the changes in locations will be permanent.  I’m really glad we went with the additional 4 inches of depth; 12 inches would have been too narrow and these shelves don’t stick out any further than the bookshelves did (and less so in real life than they appear to in the photos).  As an added bonus, we now have the 2 bookshelves in our entryway holding my cookbooks and our games.  We also have the 1 foot pieces of shelving that were cut off the 6 foot lengths at Home Depot that I’m scheming a place for…we paid for them, we might as well use them.

Thanks again Dad and Brian!

This post does not contain affiliate links.  I have no affiliation with Home Depot.

Highlights: Kitchen Accessories
Kitchen Tools I Could Not Live Without
Cleaning out your kitchen
Twosday XXII: Kitchen (and more!) Painting Edition
Did you enjoy this post? Share it!
« The End of Summer (CSA Menu Plan#9)
Whole Wheat Food Processor Pizza Dough (in a hurry!) »