I am a list maker.  I make lists all the time: at work, at home, on paper and on my computer.  One of my favorite lists to make is my weekly grocery list, which I outlined in too much detail in an earlier post.

As you may know, I upgraded to an Android smartphone in August.  Recently, Cynthia made me aware of a grocery shopping list app, Grocery IQ, a free grocery list app powered by Coupons.com.  So, I tried it out!  I’ve been using it for the past 6 weeks to create my weekly grocery lists and do my shopping. 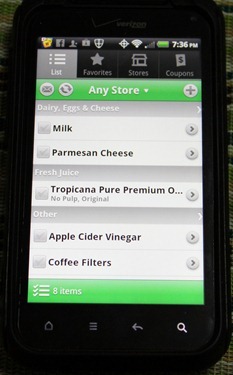 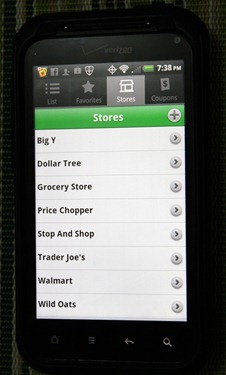 Overall, I really like Grocery IQ.  It’s been over a month and I keep using it.  I feel much more organized-I never lose my lists, I can update whenever I think of something and it’s easy to use.

Disclaimer:  I downloaded Grocery IQ for free from the Android Marketplace.  The opinions expressed above are my own.