I recently discovered the Whole Grain Council’s “grain of the month” calendar and will be trying out a new grain each month, just because I needed to add another goal to my life.

I got off easy last month: corn was an easy ingredient to find, use and write about.  Based on the Whole Grain Council’s calendar, one of this month’s grains is teff, which left me wondering just one thing.  What in the world is teff?  After a little research I discovered that teff is a form of millet that’s gluten free, has over twice the iron and three times the calcium of other grains and is best known for being used in Ethiopian injera flatbread.  Sounds good to me.

I decided to make Teff Crepes with Sautéed Spinach and Mushrooms from the Whole Grain Council website because I figure they know what they’re talking about and I didn’t have any teff recipes in my arsenal.  The recipe seemed simple and delicious; I liked it because teff is the only grain used so I’d actually be able to taste it. 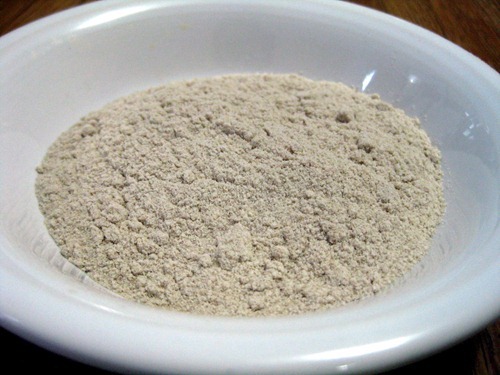 Unfortunately, I couldn’t find teff flour at our local co-op.  Once again, Cynthia saved the day by picking some up for me on a trip to Albany.  The flour’s color and texture reminds me of whole wheat pastry flour–light brown, very fine and powdery.

I followed the recipe for the crepes exactly.  In the past I’ve made wheat flour crepes with mixed success, so this time I worked hard to make sure that my batter was well mixed (which included warming up the butter/milk mixture just a bit because the melted butter solidified when it hit the cold milk).  The filling I adapted slightly, since Brian was “all mushroom-ed out” (which I don’t understand because I can’t remember the last time I cooked mushrooms).  I added a couple crushed cloves of garlic to the spinach as it cooked. 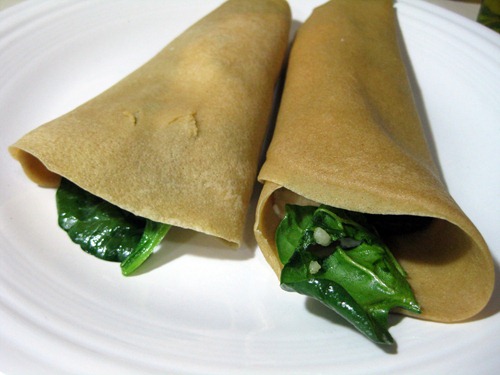 The crepes came out really well.  I probably used an excessive amount of ricotta when I filled them, but then again I  believe you can never have much cheese. Interestingly enough, the crepes didn’t taste that different from whole wheat flour, despite the fact that some things I read said that teff has a different flavor.  They were also my most successful crepes, ever.

I did later find Bob’s Red Mill Teff Flour at a more local (but still out of town) location, but the bag was selling for close to $9, which means teff probably won’t become a regular part of my cooking.

In short: teff flour is pretty darn good.  If it’s healthier than wheat and doesn’t taste that different, it makes sense to use it instead (though I’m pretty sure it doesn’t work as a 1 to 1 ratio in recipes).  I still have a cup or two left, so I’ll probably attempt making something else.  Also, crepes are awesome, in general.

Stay tuned for December’s grain, buckwheat, which I also have no experience with.  I’m open to suggestions!

Challah with Friends
Wearing Green and Eating Beef
Chocolate Covered Banana Bites (Recommended Recipe...
I Am In Love With This Quiche
Did you enjoy this post? Share it!
« I <3 Evernote
Highlights: T-Day Trivia »