If you missed part 1 of my favorite things from our recent Oregon/Washington vacation, check them out!

We ate a lot on this trip, most of which was really delicious.  I don’t think we had a bad meal the entire time, but we generally read menus before we decide on a place and I’m not really very picky, so I’m not sure that’s a good indicator.  Still, it was really neat to see menus flaunting their vegetarian, vegan, and/or gluten free options.  It was even more exciting to discover that the vegetarian options, when I chose them, were delicious.

In the end, all of my favorite meals were in Seattle, although I’m sure that’s partially due to the fact that the bulk of our trip was spent there.  I am very grateful that Brian and I took the smart phone plunge last month; the Yelp and Urban Spoon apps were incredibly useful in finding these great restaurants. 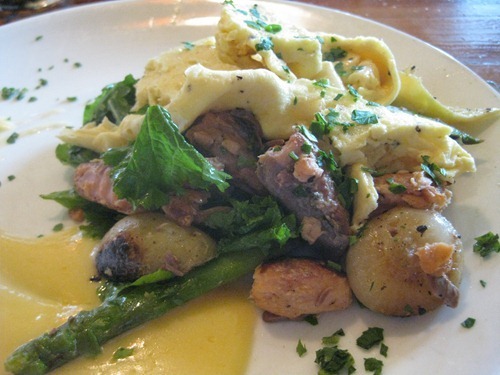 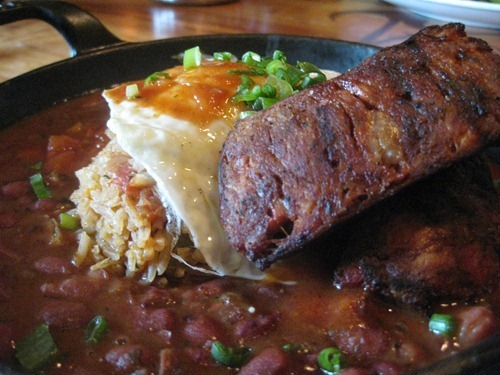 In an uncharacteristic move, I booked a hotel in Seattle that didn’t serve breakfast.  Luckily, I overheard one of the employees mention to another customer that Toulouse Petit, which was just down the road, offered a breakfast happy hour.  And, sure enough, most of the dishes on their breakfast menu are just $7.50 during the week.  And the menu at the highly acclaimed New Orleans style restaurant was really interesting.  I had the fabulous smoked salmon and asparagus hash (top photo) and Brian had delicious and rather spicy house made Andouille sausage with red beans.  It was unlike any breakfast I’d ever had before. 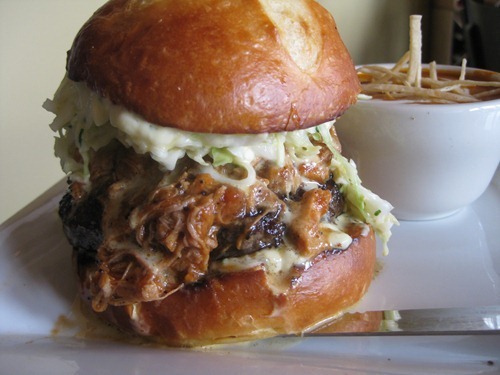 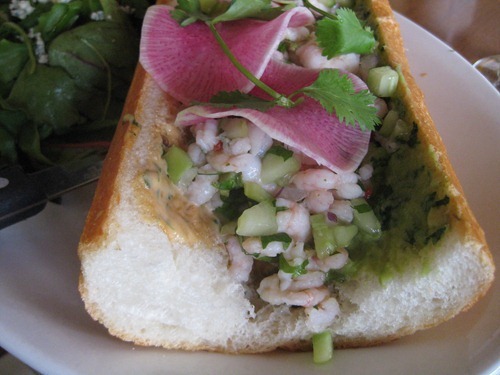 lunch: Matt’s in the Market

In July, Brian and I went to a Kim O’Donnel book signing.  Brian had the forethought to ask Kim, who’s from Seattle, where she would recommend eating.  After telling us we wouldn’t go wrong anywhere, she recommended Matt’s in the Market.  I don’t think we would’ve found it otherwise, so I’m so glad she told us about it.  Tucked above Pike Place Market, the restaurant had incredibly friendly staff and an equally tempting menu.  Brian thoroughly enjoyed his burger topped with pulled pork and side of tortilla soup (top photo).  I managed to pack away the entire shrimp salad with avocado sandwich seen above. 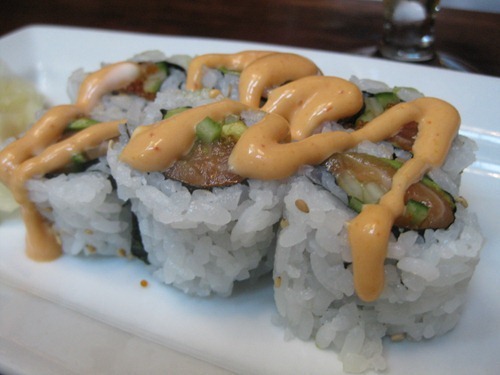 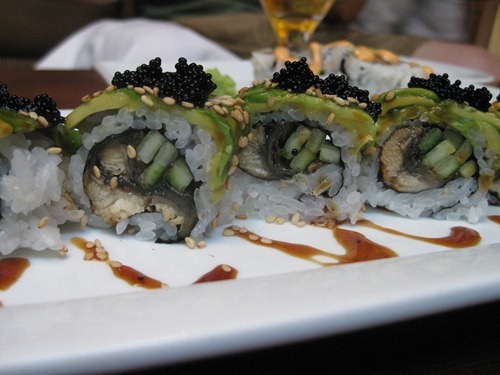 If we’re on vacation, chances are good there’s sushi in our future.  Based on recommendations from my phone, we checked out Umi Sake House.  The atmosphere was awesome and the menu was extensive.  Our usual sushi procedure is that Brian makes all of the decisions, and he spent at least 15 minutes pouring over the menu.  When our rolls arrived they were some of the prettiest sushi I’d ever had and the pieces were actually bite sized, compared to other sushi I’ve been served and struggled to consume in one bite. 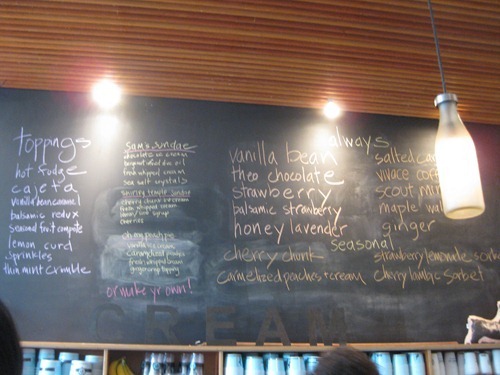 As I mentioned, we met up with a couple of our college friends for ice cream while we were in Seattle.  They took us to their favorite place, Molly Moon’s Homemade Ice Cream Shop in Wallingford. As you can see, there were some really interesting flavors available.  Brian went for vivace coffee, but I chose the  honey lavender.  Did you know that Sequim, Washington is the lavender capital of North America?  Neither did I, until last week.  Anyway, the ice cream was amazing.  I’m sure honey lavender wouldn’t be for everyone, but it was so refreshing and different.