Posting’s been thin lately, but I have a good excuse (I think).  My sister and I were on vacation in Quebec City.

If you’ve never been (and we hadn’t), I highly suggest you go.  We had a wonderful time shopping, going to the Musée National des Beaux Arts du Québec, walking through The National Battlefields Park, and, of course, eating.

I’m sure Quebec isn’t the end all, be all of fine cusine, but I took my mini-vacation seriously and ate whatever I wanted, not necesarily in terms of quanity-we stuck to 3 meals a day, and relatively cheap ones because we’re like that- but I ordered whatever I felt like off the menu, vegetarian or not.  We were only there for 3 days and it was vacation after all.  Everything we ate was delicious (who doesn’t love crepes?), and despite our lack of ability to speak French, the waitstaff in all the restaurants we tried were accomodating and helpful. 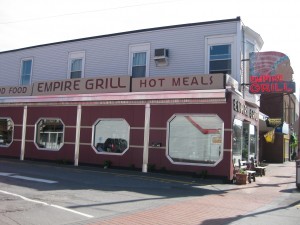 The Past 2 Weeks
No Reservations: Mexico
I am Old and Boring
We Didn’t Starve!
Did you enjoy this post? Share it!
« Delicious Bowl of Mush
Covert Operation »