Post Punk Kitchen has recently become one of my favorite recipe blogs.  Everything Isa Chandra Moskowitz (co-author of Veganomicon) cooks up sounds delicious and I find myself saving almost everything she posts.  One recipe especially piqued my interest: vegan sausage.

In general, I’m fairly anti-fake meat.  I don’t mind the occasional tofu or tempeh, and I like making my own veggie/bean burgers, but I try to avoid premade veggie burgers, chick’n or animal-free sausages.  But this recipe doesn’t contain anything particularly strange; the only ingredient I didn’t have in my pantry already was vital wheat gluten.

Assembly of these sausages was incredibly simple.  Basically you mash a cup of beans, add the rest of the ingredients and stir to combine.  Isa recommends combining the ingredients in using the order listed, but once I added the vital wheat gluten (ingredient # 5), the mixture became sticky, thick and hard to stir (kind of like meat!)  I’m no expert, but it seems to me that you could blend all the spices together, stir them into the liquids and add the vital wheat gluten last in order to have a more even mixture.  After the mixture is made, you divide it into 4 parts and wrap each part in a square of foil, “like a tootsie roll”. 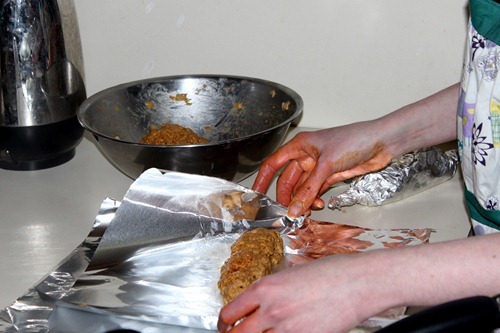 The steaming made me a bit nervous.  The most steaming I’d ever done is a handful of vegetables for a few minutes.  I wasn’t sure my pot wouldn’t run out of water during the 40 minute steaming time.  Also, apparently my steamer basket is sort of on its last legs.  But there was plenty of water still in the pot when time was up. 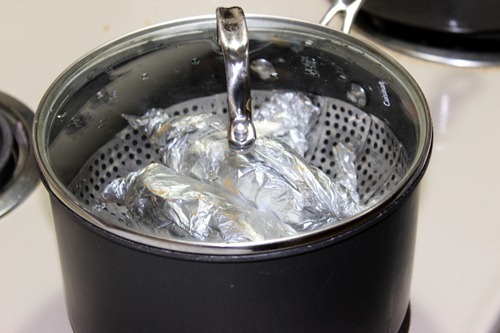 This recipe is extremely simple variation on seitan (which I’ve only had once, about a year ago).  I think it would be really neat to adjust the flavorings.  Perhaps create breakfast sausage?   The only downside was that the recipe used almost the entire 10 ounce box of vital wheat gluten which, at $4.39 was still much cheaper than pork sausage, but is slightly more cost prohibitive than a can of beans.  I suspect I may be able to find vital wheat gluten for less than my local co-op sells it for; I’ll be keeping my eyes open. 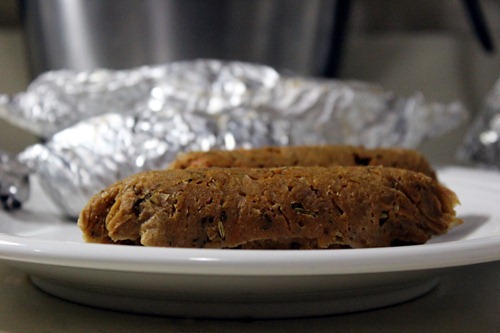 I was pleasantly surprised to discover that, just as the recipe had promised, the steaming shaped the sausages into tubes that actually did look like sausage.  The flavor was pretty close to a regular sausage, although the texture was different enough from meat to make it clear that it wasn’t.  Still, they were pretty delicious and I’ll probably make them again in the future.  And then we served the sausage with eggs…which I only realized was a contradiction as I cooked them.  But that’s just the way things work around here. 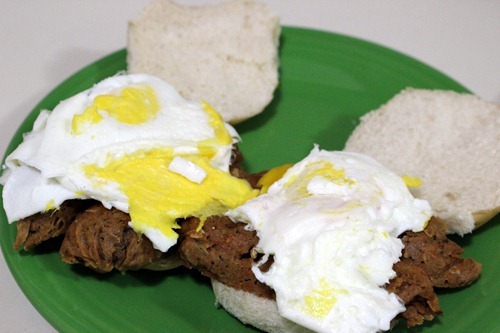 Dining Out Vegan (Vegan, Days 5 and 6)
How I Got Over My Fears and Made Crackers
Dinner, in Brief
Asparagus Goat Cheese Galette (Recipe Review)
Did you enjoy this post? Share it!
« Highlights: Whole Grains
Quiche Lorraine with Mushrooms (Or, Using Up Eggs) »