Fast food is pretty rare in my life currently, but I can’t ignore the impact it has on American eating and culture.  The rise and fall of fast food chains is sort of fascinating to me.  Every week all sorts of articles appear in my Reader about new menu items and changes happening at the various restaurants, for better or worse. 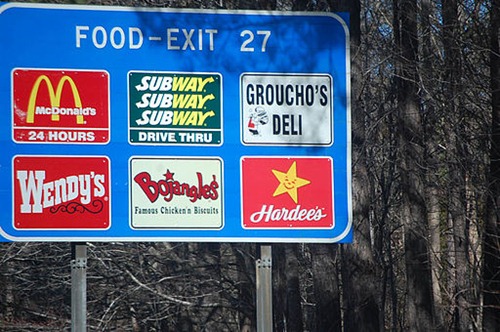 Burger King is going cage-free, though this article on Eatocracy doesn’t specify when.  I’ve never been a big Burger King fan, so this only improves my opinion of them slightly, but it is exciting to see more and more places moving towards cage-free eggs.

Is it normal for restaurants to have outdoor grease pits? That doesn’t seem like a good idea at all, especially after a five-year-old fell into a grease pit outside a Sonic Restaurant in Tennessee.

Washington University is paying people $3,500 to only eat fast food for three months.  I think I’ll keep my day job, especially since I don’t feel like gaining 5% of my current weight in that period of time.

Recently a number of fast food establishments have added “artisanal” products to their menus.  Zagat put 7 of those artisanal products to the test.  I’d be lying if I said I wasn’t interested in trying Dunkin’ Donuts new artisanal bagels, especially the pumpernickel.

Speaking of, I’m also kind of intrigued by the new Dunkin’ Donuts breakfast burritos mentioned on FoodBeast, since  DD breakfast sandwiches used to be one of my go-to meals in college.

After showing poor results for the chain, Wendy’s is pulling their “W” burger from menus. (via FoodBeast) At the same time, Wendy’s has introduced new signature side dishes which Chow’s James Norton tried out and approved of.

McDonald’s billboard for it’s new banana bread appears to be falling apart, but it’s supposed to be that way.  Sometimes advertising is just weird. (via Huffington Post)

I’m kind of surprised more places haven’t made the same decision, but Domino’s now has gluten free pizza crust.  Serious Eats gave the new crust a try.  I wouldn’t be surprised if other establishments follow their lead.

NPR has an interesting article about a new Crown Crust pizza from Pizza Hut and what it says about marketing fast food globally.

Lastly, now that my brain is full of fast food temptations, a reminder from Huffington Post’s Will Allen about the 7 Consequences of Eating Fast Food.

Photo by Daniel Barcelona (Own work) [CC-BY-3.0], via Wikimedia Commons

A Night at Rub Bourbon and Barbecue
Highlights: Winter Squash
Highlights: Blogs that Inspire
Highlights: How Does Your Garden Grow?
Did you enjoy this post? Share it!
« Accomplishments and Lack Thereof
Return to the Farm »