My sandwich consumption has really decreased in the past 5 years or so.  One of the reasons I first started making hot lunches to bring to work was because I was tired of eating sandwiches every day (the other reason, of course, being my desire to eat less meat).  Growing up my mom would always put a sandwich in my school lunch; sometimes the sandwich was ham and cheese, sometimes it was turkey with mayonnaise and curry powder (a personal favorite–I’m sure the other kids thought I was weird).  In college, when I didn’t like anything else in the dining hall, I’d order a salami and provolone sandwich on a roll.  I don’t know why, but it was always good.  Even though I don’t eat sandwiches as much as I used to, I’m still a fan of a good one. The internet is certainly not short on inspiration. 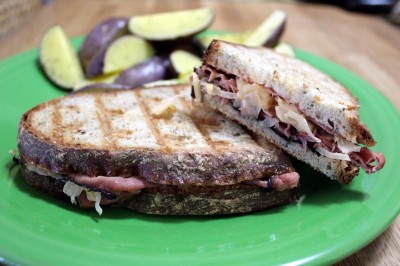 Serious Eats has been seriously sandwich focused lately.  They put together guides to American sandwiches and international sandwiches, both of which are filled with sandwiches I never knew existed.  Maybe I need to get out more.

On a local note, a Williamstown deli was just written up for their collection of sandwiches named for celebrities. Apparently “every [celebrity] on the menu has actually been here and eaten that particular meal”, which I think is really interesting.  Now I just need to find an excuse to go there again.

I’ve had grilled cheese sandwiches on the brain since getting my George Foreman Grill back at the beginning of August.  It’s not that I can’t make grilled cheese on the stove top, but having the grill sitting on my dining room table in constant view makes me want to use it all the time.  Huffington Post isn’t helping with their list of recipes from the 2012 Grate Canadian Grilled Cheese Cook-Off.

When I make burgers, they’re generally patties shaped from beans.  This recipe from Grab A Plate uses eggplant slices as the burger and tops the sandwiches with spicy garlic spread.  Sounds good to me! (via Meatless Monday)

Apparently it’s football season again.  At the very least it’s college football season, I’m actually not sure about the NFL.  And that is why you won’t see any football highlights on Relishments; I have no idea what is going on.  You will, however, see a post from Food Republic about sandwiches named for football players, because I don’t need to know who people are to know if the sandwiches sound tasty.

We never made egg salad in my house growing up and every once in a while I wonder if I’d actually like it.  I know Brian likes it so I should probably try making egg salad some time.  Maybe this collection of 10 egg salad sandwich recipes from The Kitchn would be a good starting place?

Lauren made some really beautiful Lamb Souvlaki Pitas recently that don’t look too difficult.  Definitely a more unique sandwich than I usually make!

Lastly, there are dessert sandwiches.  Food & Wine completed a taste test in search of the best ice cream sandwiches.  Endless Simmer has a recipe for a Chocolate Dipped Ice Cream Cookie Sandwich…on a Stick that looks a little complicated, but quite possibly worth it (especially if you made the ice cream as well!)

Highlights: Tomorrow is Food Day
Highlights: July 4th Desserts and More
Highlights: The Most Important Meal
Highlights: Numbers Edition
Did you enjoy this post? Share it!
« Dinner at Bascom Lodge
How I’m Trying to Save My Sanity This Fall »