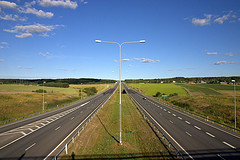 Last night I dreamed that I was offered an amazing job, but I had to refuse it because there was no way I could get there and still enable Brian to get to his job since we only have one car.

Despite my apparently uncomfortable subconscious, the transition to single car ownership has actually been pretty smooth.  We sold Brian’s 1999 Ford Escort a couple of months ago after about a year of discussion.  We work at the same school and the Ford was spending most of its time just sitting in the parking lot outside our apartment.  It no longer made sense to own two cars and the environmentalist in me wanted to get rid of one.

The actual act of selling the car was a little scary for me, despite the fact that I think it was my idea to begin with.  Once we decided to get rid of the car, we causally mentioned it to someone at church.  Just a day or two later we got a call from another family at church asking about it.  I hadn’t expected to get rid of it that fast!  I kept thinking about how much of an adjustment it was going to be to only own one vehicle.

In reality, it hasn’t been bad.  Sure, I’ve occasionally asked for a ride home from a department meeting with a coworker and it was a little annoying to drive Brian to meet his carpool for a recent out-of-town professional development, but those incidents are the exception, not the rule.  Now we’re more intentional about our plans-we either go places together or someone opts to be stranded at home.  And that’s okay.  Even more okay was the reduction in insurance and excise tax.  Plus the smile on the face of the high schooler we sold the car to.

On an unrelated note, I was featured on Healthy Living Blogs yesterday! Check it out!

Save the Planet. Save Your Wallet. Use a Water Bo...
Seventh Generation Dish Liquid Review and Giveaway
Did you enjoy this post? Share it!
« My Sanity Saving Taco Bar
Highlights: Time Management »