Remember that time I made a menu plan featuring winter squash curry? (Side note: remember that time I planned to write and publish this post on Wednesday but then found myself in the midst of the busiest week ever and the realization that the 3 projects for my grad class are all due on the 5th of December and not one of them had been started?  Yeah, that’s how this week went and that’s why this post is so late and this week has been so quiet on Relishments).

Well, part of the reason that I chose that recipe for last week’s menu was that I had all the ingredients on hand: winter squash from the CSA, onion, curry powder, ginger, coconut milk.  Except, as it turned out, I  didn’t actually have coconut milk.  And I didn’t discover that there was no coconut milk in our pantry until I was on the second step of the two-step recipe.  On an evening when we’d just arrived home from the supermarket, obviously.

As per usual, I had a brief moment of panic during which I whined at/asked advice of my husband.  He suggested I use regular milk instead.  Initially I thought that sounded disgusting, but a quick search of “coconut milk substitutes” made it apparent that Brian was not crazy, at least in this case.  I combined several of the suggestions I found online to create the 1 cup of coconut milk I needed.

As I wasn’t sure the substitution would work at all, I didn’t take exact measurements.  What I did do was fill a 1 cup measuring cup about 2/3 of the way with plain Greek yogurt, add a couple teaspoons of coconut oil, a tablespoon or so of shredded sweetened coconut and then filled the remaining space in the measuring cup with regular lowfat milk.  I didn’t bother to stir it in the measuring cup, just dumped it in the pan with the squash and then mixed it there.  I also added a couple more tablespoons (again, not measured) of shredded coconut to increase the coconut flavor. 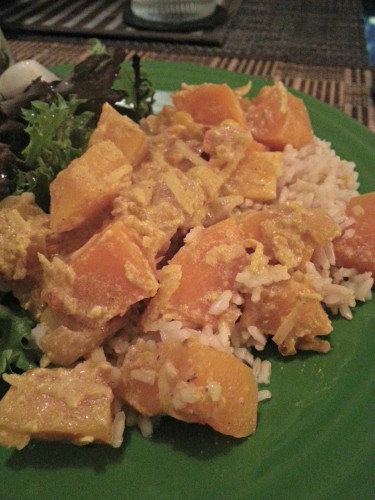 The results were surprisingly satisfactory.  If I didn’t know the recipe hadn’t used coconut milk I probably wouldn’t have noticed it.  I don’t think that my substitution would work in all recipes, but for curry it was perfect.  I would not be surprised if it makes an appearance in my kitchen again soon, even if I do have coconut milk available.  Also, here’s today’s tip: check your cabinets before you go shopping and before you begin making a recipe.  Trust me on that one.

Highlights: The Most Useful
Meals in a Pinch
Eating Healthy on a Budget {Guest Post}
Getting Started with Flexitarianism
Did you enjoy this post? Share it!
« Being Flexible + 11/15-11/26 Menu
Highlights: Non-Traditional Thanksgiving »