Online projects I completed over the extra-long break

1.  A little blog facelift – take a look around and let me know what you think!
2.  Some serious Feedly organizing – I deleted a ton of saved items, unsubscribed from blogs that no longer interest me and read a lot of the posts I hadn’t gotten to.  I’m trying to take the “touch it once” principle to my feeds as well.  In addition to reserving blog reading for only certain times of the day, I’m attempting to immediately read, file, comment on, share or remove posts from Feedly, instead of letting them sit around forever with my best intentions. 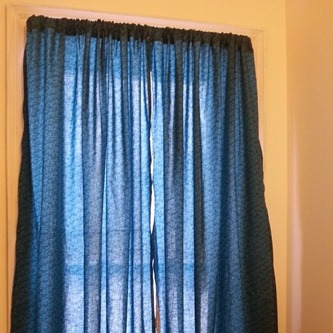 Offline projects I completed over the extra-long break

1.  Reorganizing our big catch-all closet…which led to me wanting to reorganize all the things, including our basement.  Soon, basement, soon.
2.  Making my second set of curtains.  I used these instructions again (though this time around I didn’t really look at them) and, shockingly, the panels came out the same length!  They’re not perfect but they are considerably better than the first set I made and I’m feeling pretty proud of myself.

1.  The Shining…for the first time ever, followed by the documentary Room 237 (available on Netflix) which was perhaps more creepy than the movie itself.  That Kubrick was an interesting guy…
2.  The Iron Lady, which was really interesting, but once Brian pointed out similarities in Meryl Streep’s portrayal of Margaret Thatcher and Julia Child, I was a little distracted.

1.  Write several guest posts (email me if you’re interested!)
2.  Keeping a regular posting schedule of once per weekend, Tuesday and Thursday.  This is easier said than done, so we’ll see.

1.  The new Healthy Living Summit podcast,  Best Life Ever.  Not only does it feature two of my favorite blogger-friends, but it also discusses some of my favorite topics, like goal setting and organization.  Check it out—it’s not just for bloggers!
2.  NPR’s Ask Me Another.  It’s a combination of trivia, word games, brain teasers and music (from Jonathan Coulton!).  I’ve definitely found myself calling out answers before the contestants.

Sites I’m falling in love with

1.  I first saw an ad for ulive.com while watching television at my brother-in-law’s house over break.  The site, run by Scripps Networks, has shows from Food Network, HGTV, Cooking Channel, DIY Network, Travel Channel, Great American Country and City Eats.  These are the exact sorts of channels that rarely have content on Netflix or Hulu and therefore I’ve been missing since I entered a non-cable living situation almost 5 years ago.  Maybe everyone else already knew this, but I’m pretty excited about it.
2.  Todoist.com – I’ve only been using it for a week or so but I’ve been so desperate to find a replacement for Astrid.  So far, I’m really like Todoist for keeping my to do list organized.  If I decide to keep it around, I’ll do a full post about it.

Things I’m glad are over

1.  My 5 year blogoversary week – doing three giveaways in one week is more work than I initially anticipated.  I will try to not commit myself to that again.
2.  Winter break – as much as I thoroughly enjoyed it, I really needed to get back to my routine before I completely forgot what I was like to have a job.  It’s good to be back in the swing of things.

As always, Twosday is inspired by Then Heather Said.