We’re a couple months into our winter CSA share now and the produce is still great.  We’re consuming more squash and potatoes than the average person, but I’m totally okay with that.  It’s been fun coming up with new ways to enjoy them, though there’s still a lot of roasted squash and potato hash happening. 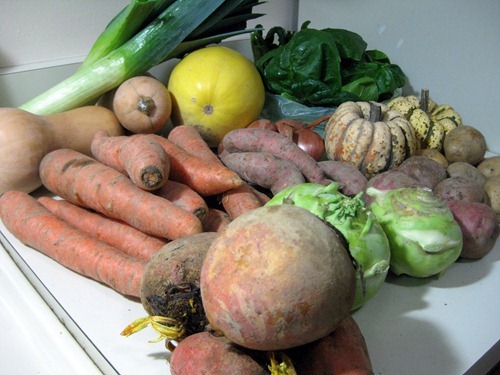 This was also the week we forgot to get kale (for this soup) and eggs, both of which we discussed while at the farm, but somehow did not actually pick up.  It was a bit frustrating to need to revise my menu as a result, but we managed. 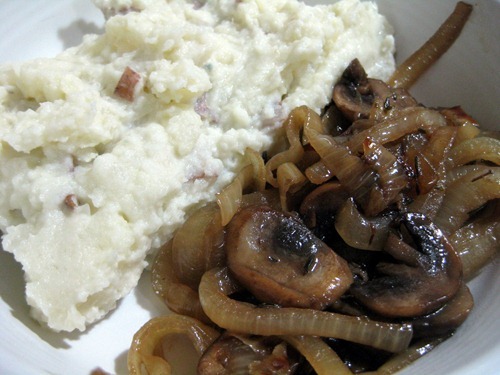 These blue cheese mashed potatoes with caramelized onions and mushrooms were one of the best things I’d eaten in a long time.  The idea and execution are both pretty simple (though it does take a while to caramelize the onions) but the flavor was fabulous.  Granted, I think anything with blue cheese is fabulous, but I never would’ve thought to add it to mashed potatoes. 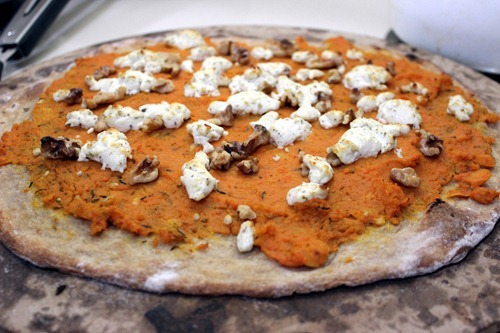 I also revisited the sweet potato and goat cheese pizza I attempted a few weeks ago.  This time, on Brian’s suggestion, I pureed the potatoes instead of leaving them in chunks.  As a result, the pizza was much more manageable to eat.  Another excellent combination.

Second Pick Up (Week of December 12): 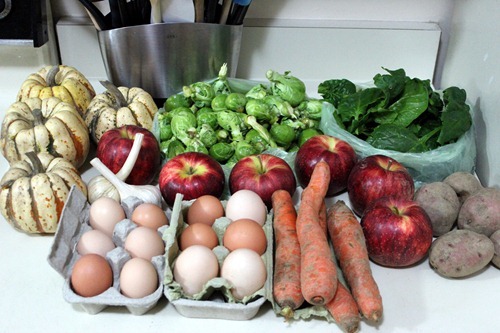 This pickup looks small because it is.  We headed to North Carolina to visit Brian’s parents just 6 days after the bi-weekly pick up.  As per usual, because we’re those people, we arrived in North Carolina bearing produce.  The acorn squash and the 2 pounds of Brussels sprouts seen above were given to his mother.  She was really excited to have such fresh Brussel sprouts and the whole family enjoyed them sauteed with bacon as part of Christmas dinner.

Still, we did use some of the ingredients.  I made a parmesan and spinach frittata and several of the remaining eggs were used to make cookies for my coworkers.  We also got 2 meals out of this (really simple) batch of winter squash curry I made using butternut and acorn squash from the previous week’s pick up: 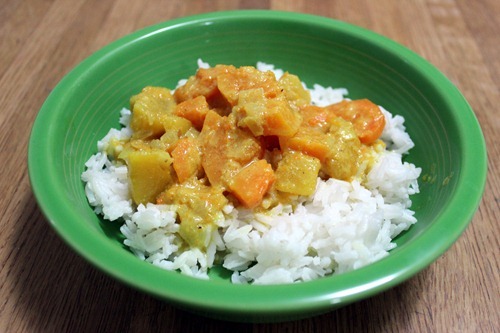 #sponsored All the time we've spent at home lately

This weekend's weather was amazing and my family e