I am not a Pinterest addict.  I am, however, an occasional Pinterest user.  Somehow I’m managed to avoid the obsession that’s captured so many of my twenty-something peers, but I don’t think it’s because I’ve got better willpower.  Seems much more likely that it’s just the last thing on my long list of social media sites to check and, as a result, I don’t often get there.  That said I’ve still managed to accumulate 436 pins (yikes! maybe I’m more addicted than I thought!).

Last month the Pinstrosity blog (which is well worth checking out) announced their most recent challenge.  I love a good challenge and, since pinning tends to be easier than the actual doing, am looking forward to actually completing some of the projects I’ve saved.

So the other night I made a Pinterest-inspired dinner.  The main course was this soup which, after clicking through the links attached to this pin brought me this recipe for Tomato Basil Parmesan Soup on Today’s Mama.  Part of the reason why I saved this pin was because it’s a slow cooker recipe.  I like slow cooker recipes because they’re really simple and cook while you’re at work.  Unfortunately this one only cooks for 7 hours AND requires you to make a roux, add it to the soup and cook for an additional 30 minutes.  With that in mind I decided to make the stove-top version which took me just over an hour, the entirety of which I was also talking on the phone with my mom. 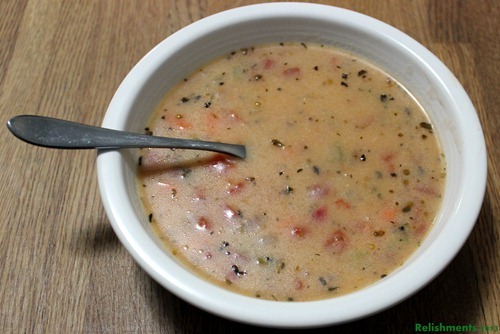 This soup was easy to assemble, despite needing an additional pan for the roux.  I often have trouble getting things to thicken properly but that wasn’t a concern here.  In the end however, neither Brian or I were very impressed by this soup.  The recipe does use milk but it doesn’t achieve the cheesy-creaminess I imagined when looking at the original pin.  The flavor wasn’t as deep or intense as I’d hoped and the roux method of thickening produced a slightly strange texture, though certainly more than edible.  Possibly the use of cream instead of milk or the addition of garlic would have helped.  Overall not bad, but not something I’m looking to make again.

Bread and soup go together in my mind like peanut butter and jelly do for most normal people (I’m still not convinced they go together at all).  This pin featuring Rosemary Olive Oil Bread from A Hint of Honey seemed like the perfect accompaniment to the soup.  I almost always use my KitchenAid mixer to knead bread for me, but this time I decided to follow the directions and do it all by hand.  Not wanting to purchase white wheat flour for one recipe, I substituted 1 cup whole wheat flour and half a cup white flour instead.  This bread bakes on a pizza stone, which I’d also never tried, but it worked fine. 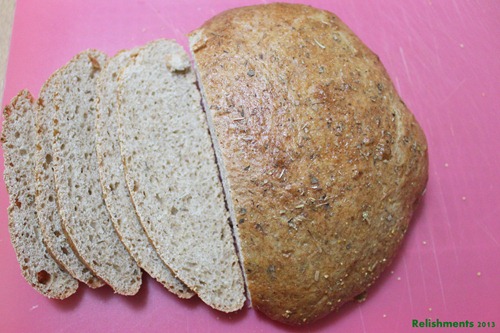 I was a bit disappointed when my bread lost some volume during my attempt to move it from the pizza peel to the pizza stone.  Even though there was cornmeal on the peel the dough stuck and so my loaf was a bit smaller once it hit the stone.  Nevertheless, I really like the way this bread turned out.  The texture is wonderful, it has a great yeast/wheat/herb smell and it’s sturdy enough that I can cut fairly thin slices which means the loaf lasts longer.  Clearly my picture is less impressive than the Pinterest one, but it’s the taste that counts and this loaf was a winner.