I’ve been planning this Halloween Highlights post for weeks; saving links and thinking of ideas.  In light of Hurricane Sandy, however, it seems much less important.  Halloween festivities have already been cancelled for our area and tentatively rescheduled for Friday night.  Almost all of the county schools are closed so Brian and I won’t be working until Wednesday.  Stay safe everyone.

On a lighter note, Brian and I went to our first Halloween party in ages yesterday.  The party was hosted by my good friend Jen (of tea wreath and card fame).  In an effort to create appropriate, cheap, comfortable costumes, we dressed up as tourists, spending a grand total of $5 to create our costumes.  The party was a lot of fun and I’m really glad we went.  Maybe next year we’ll be even more creative. 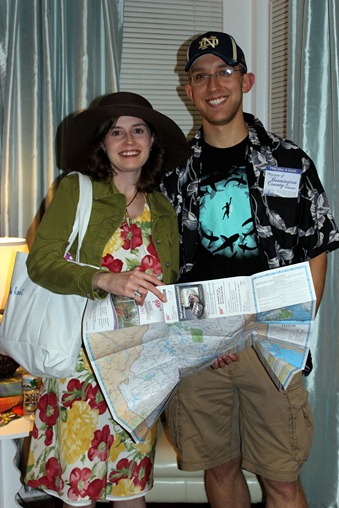 All of the (delicious!) food at the party was pretty normal; I brought snickerdoodles.  But if you’re having a party and want to make it extra creepy, try one of these FoodBeast suggestions for scary food.  On the other hand, if you prefer that people eat the food instead of be grossed out by it, Mashable has 21 Halloween desserts from Pinterest.

Every Halloween there’s a new statistic released about how much money is being spent on candy.  This year the Huffington Post reports the average candy spending is about $24.  I always buy candy to give out (if we don’t get many kids, more for me!), but I cannot fathom spending that much.

Halloween or not, I really want to make these lollypops seen on the Chicago Tribune site.  And most of the candy listed in Julie’s collection of homemade candy recipes, especially the peanut butter cups and Mounds.

Evan’s Candy Party Mix makes me wish I was going trick or treating so I could make some.  Or I could just buy a bunch of candy and make it anyway.

In the non-candy department, these ghost shaped cheese crackers are adorable.  I haven’t made crackers in ages;  I should probably get on that. (via The Kitchn)

Leftover candy is not a problem I have ever had, but if I ever do I will use this idea from Serious Eats: use leftover candy in homemade ice cream.

Finally, a picture of Jen’s dog, dressed as a dragon.  Because he is adorable. 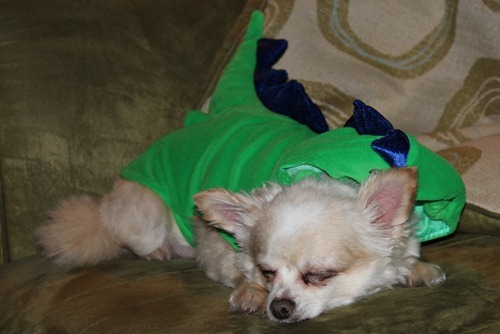