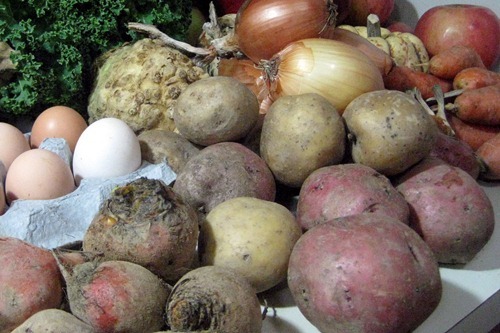 When asked to name my favorite food, I usually say pasta, which is not very specific but is very true.  If I was forced to choose something other than pasta, I’d probably go with potatoes (or cheese, but that’s another post).   They’re diverse, versatile, delicious, filling and available year round.  Clearly, I’m not alone in my love:

This Mark Bittman column reminds us not to blame potatoes for processed foods like Pringles.  Potatoes have plenty of positive nutritional attributes.

I’ve never tried making baked potatoes in a Crock-Pot, but this Skip to My Lou post makes me want to try it.  (via The Kitchn)

Also on The Kitchn, the answer to the question “What’s the best way to freeze potatoes?”  Unfortunately, there aren’t many responses in the comments yet.

In an piece about unexpected uses for a microwave, Huffington Post featured instructions for making potato chips.  As per usual, I haven’t tried this one yet either, but it’s definitely intriguing.  I’ve never considered making chips because I’m scared of deep frying, but this is definitely a possibility.  Please let me know if you try it!

Spicy Potato Soup (It All Changes)

Vegan (or not!) Cream of Potato Soup (Joy the Baker)

Highlights: Seafood
Highlights: Earth Day
Highlights: 2014 Gift Guides
Highlights: Meat and Dairy Free
Did you enjoy this post? Share it!
« What I Buy at Trader Joe’s
Pickled Beets and Onions »