This November, I finally accomplished one of the items that’s been on my to do list since at least 2012.  I participated in National Novel Writing Month. NaNoWriMo, as it is popularly known, has been happening online since 1999 and encourages individuals to write 50,000 words in November.  Signing up online connects participants to an awesome support community, plus a place to submit their word count and verify their final total.  Reaching 50,000 words makes you a “winner” in the eyes of NaNoWriMo and from the moment I decided to participate, I had my eyes set on making the goal. 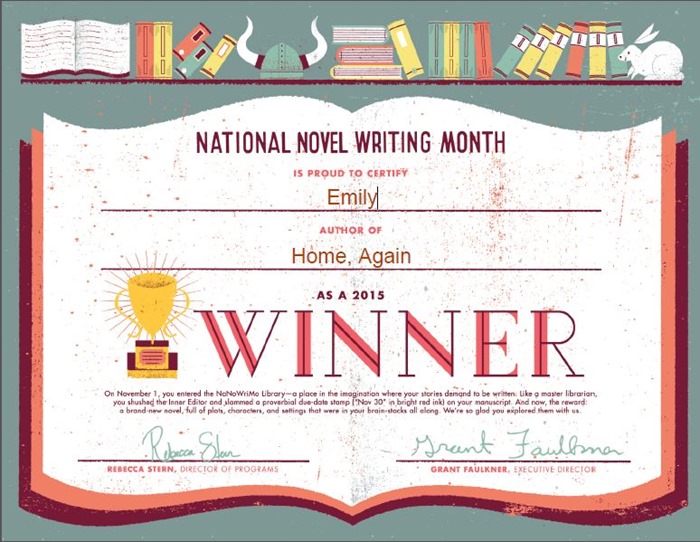 Turns out, writing is hard!  Though I had good intentions to do some planning – write an outline, develop my characters – before November began, I never got around to it.  I didn’t really suffer from writer’s block, but I definitely didn’t know where the story was headed.  As a result, I often wrote prose I wasn’t thrilled with and in the end, the story didn’t go in a very clear direction and, though I met the word count limit that qualifies me as a “winner”, my story isn’t finished.

On the other hand, it was sort of freeing to write fiction that was just for myself.  Writing blog posts for the internet means that I choose my words carefully and make efforts to get across specific points.  I think about site traffic, page views and whether my posts are Pinterest-friendly.  But while working on my novel last month, I was free just to write what came to mind and see where it took me.  I knew that I could go back and edit it and that no one needed to see the first draft, so I was able to make decent progress every time I sat down.

This project also reminded me of what awesome support I have in my life.  Before the project began, I put out some feelers on Facebook, asking my friends who had participated previously if they had any advice.  Every single person encouraged me to do NaNoWriMo.  My friends at work asked me about how it was going regularly and one woman even joined me in the challenge.  Lucy texted me every time I posted a new word count achievement on Twitter, encouraging me.  My family let me be anti-social during Thanksgiving.  My husband cooked meals, ran errands and did dishes so I could stare at my computer screen for hours.

Falling behind was probably my biggest mistake.  I started out the month strongly.  I didn’t find it difficult to reach the “par” of 1667 words a day, but then we went to visit my sister on the first weekend of the month.  I didn’t get any time to write for 2 days and I spent the rest of the month trying to catch up. Every day I entered my word count on the NaNoWriMo website, but I was unable to reach the par line again until November 28.  I made my goal, but just barely.  I spent most of the Saturday after Thanksgiving sitting on the couch at my parents, writing as much as I possibly could.

Participating in NaNoWriMo meant that it was really hard to schedule time to do anything else.  I knew I needed at least 2-3 hours a day to sit and write if I was going to write at least the target average daily word count.  If I had a meeting after school or in the evening, I worried about if I was going to find time to write.  I kept my calendar as clear as possible, which meant that I was scrambling to get the Christmas presents prepped to bring to my parents at Thanksgiving and that there were a lot of other things that didn’t get done.  Blogging, keeping the house clean, menu planning and food prep all fell by the wayside.  My to do list and house are still recovering, though I spent the past week working hard to chip away at all the things I hadn’t gotten to.  As the month wore on, there were more and more days where I just wanted to come home from work and do nothing – maybe just watch Netflix or play a game.  Anything but write.  But I knew that wasn’t a choice.  It was freeing to know that these things in my life (as well as the stuff mentioned above) are optional, but I missed having the option to do them.

Now that November is over, I kind of miss working on my story.  It’s still unfinished, but I’m taking a break in the hopes that I’ll be inspired about where I want the plot to go.  That, and I’d like to actually have a conversation with my husband and maybe cook a real meal.  But I had a lot of fun creating characters and writing fiction.

After I won, I got an email from NaNoWriMo that included the following, “Every day of this past month, you chose your novel, your voice, and your story. You stayed up late or got up early. You stole minutes here and there. You created time.”  This is what I’m billing as my number one lesson from NaNoWriMo, right about “you are capable of things you didn’t think you were able to do”.  I have written many blog posts about my quest to make more time and do more things and be more organized.  NaNoWriMo taught me that it’s possible to make time for things that I view as really important and unimportant things can be skipped without major consequences.  I made the choice to get this project done and that choice helped me do something incredible.  The writing itself is not incredible; if I ever want to do anything with it I need to write some closure and then do some serious editing.  But I wrote over 80 pages of prose because I chose my novel, despite frequent complaints that I don’t have time.  I do have time for things that are important.