Until about a month ago, I was pretty terrified of frying.  And I don’t mean frying a turkey in my backyard with a huge bucket of steaming peanut oil.  I was scared of pan frying things in a slick of oil for recipes designed to put a crispy crust on something.  I always used as little oil as possible because I was convinced hot oil could  catch fire at any moment.  In addition, until the spring of 2013, we were living in apartment with very sensitive smoke alarms and I was trying to minimize the number of times I set it off.

But recently, for whatever reason, I decided to revisit the notion of pan frying and achieved some awesome results without any accidental smoke alarms.  Unfortunately, the food either wasn’t photographed, or didn’t photograph well, but I still wanted to share these recipes with you.  As I worked through each of these recipes I became more comfortable with how hot the oil needed to get (I drop some flour in to test it when I think it’s close) and how often to flip the food.  And now that I’ve discovered that it really is possible to make crispy, breaded food at home, a whole new set of recipes has opened up for me.   Feel free to share your recommendations in the comments or on Facebook! 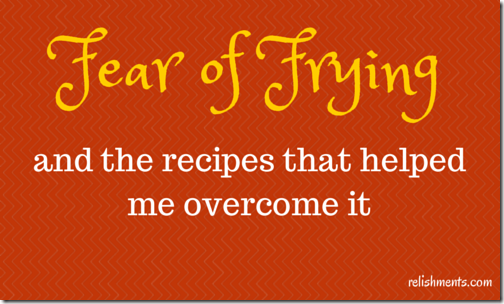 Eggplant Parmesan, from Mark Bittman’s How to Cook Everything Vegetarian: Simple Meatless Recipes for Great Food