Brian and I are just over 2 days into the Vegan for a Week Challenge and it’s so far, so good.  I don’t usually record and post all of my meals, but for the sake of the challenge, I’m going to post most of them this week.

We started off Sunday evening with a stir fry over rice noodles and some leftover black beans.  We had practically the same meal last Thursday before the challenge began.  Who said going vegan was going to be a big change?

In an effort to make my life easier, breakfast and lunch are going to be repetitive for the week (I’ll spare you daily photos).  I’m eating oatmeal with dried cranberries and walnuts for breakfast.  I am missing my standard tea with milk and sugar, but I can handle it for 7 days.  Brian, on the other hand, is using real, actual, from a cow half and half in his coffee.  It’s worth cheating to avoid the headaches that come from his not drinking coffee.  Yes, we tried soy/almond milk, it didn’t work.  Honestly, I’m so impressed that he’s willing to do this challenge with me that I’d give him any cheat he wanted.

Lunch, at least for most of the week, is rice and beans, which is another unintentionally vegan meal that happens regularly in our house.  I made a big batch Sunday night and, unlike my usual yogurt lunch, it’s actually keeping me full.  There may be something to this “prepping lunch before the week” idea.  Lunch also contains carrot and celery sticks and nuts and whatever other vegan treats Brian can find (he makes lunches; I make dinners). 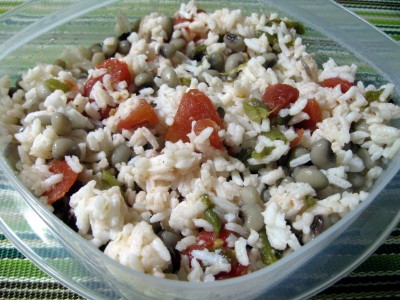 Last night’s dinner was this delicious (but disgusting looking) slow cooker Moroccan Lentil Soup from Make It Fast, Cook It Slow (but posted on Serious Eats). 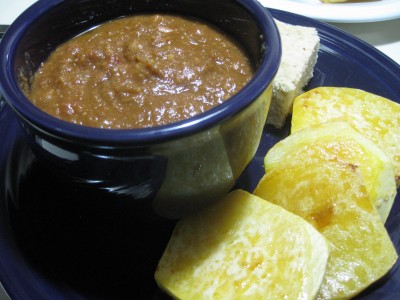 You need to make this soup.  This was my second time making it and its so good.  Plus there’s the joy I felt when I walked into the apartment after school yesterday, smelled it and remembered that I didn’t have to cook dinner.  Served with herbed olive oil bread and roasted rutabaga glazed with agave.  My first time making rutabaga–thanks CSA!–and it was delicious! 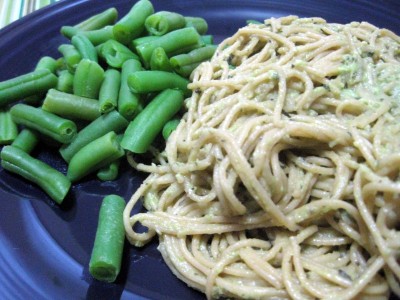 Wow.  That recipe is such a keeper.  It helped that avocados were $1 each at the store this week, making the dish cost less than $2.  Also, I am so glad that dried pasta is vegan.  Served with a side of (previously frozen) green beans.

I’ve been eating a lot of nuts and peanut butter for snacks, as well as slices of Ezekiel bread.  Eating vegan takes a little more thought than my normal eating habits, but that’s largely because I have so many non-vegan foods still sitting around.  Nevertheless, I’m satisfied and enjoying the experiment.