Every once in a while I feel like I have a day or a weekend that makes up for any lack of serious cooking that has occurred during the week.  This weekend was one of those weekends:  I made a dish to bring to our church’s sunrise service and my in-laws came to our place for Easter lunch.

There was a time (3 months ago?) when I got really stressed out about cooking for other people.  The stress has diminished, but I still worry about providing what other people like to eat.   What’s the point in cooking for other people if they’re not going to like it? Brian and I have been together for almost 8 years (crazy, I know) so I have a pretty good idea of what his family likes.

Coming up with a dish to bring for the sunrise service was a little more stressful.  I sent out a message on Twitter hoping to get some good suggestions.  My mother-in-law, who does not have Twitter but follows my tweets anyway, sent me a recipe for baked French toast with pecans.  Despite not winning any awards for being healthy, it was super easy to make and popular with the other attendees.  Next year I’m definitely making a quiche or some other egg dish though because there were 3 French toasts this year and the couple of egg dishes were gone really fast.

I’ve been planning our Easter lunch for a while.  I realized a couple of weeks ago that I’d be cool with serving the traditional ham for Easter lunch, if I could find one from a local farm.  I posted to the Berkshire Grown Online Farmers Market on Facebook asking if anyone had ham steaks available and received one reply.  I sent that farm an email.  The next day I had 2 emails in my inbox: one from the farm letting me know that they did not have ham after all, the other from our CSA letting us know about a farmer’s market that was happening the next day.  Perfect.  We ventured to the farmer’s market and successfully procured 2 ham steaks.  Beyond that semi-last minute trip, I decided to keep things simple.

Easter Lunch Menu:
Ham steaks (from the farmer’s market)
Potato, Spinach and Goat Cheese Gratin (made Saturday afternoon)
Green beans (from the supermarket)
Bread (picked up at our CSA on Saturday) 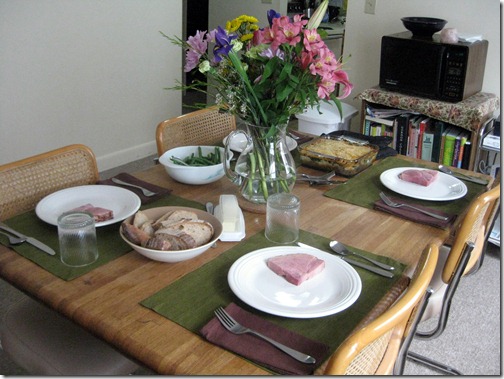 Looking at this tablescape makes me really happy.  I just feel like it looks so nice (maybe because Brian and I rarely eat our meals at the table).  We even broke out the cloth napkins for the occasion.  It makes me very excited for the days when we’ll have a house and I can accumulate more serving dishes and place mats and such.

Dinner was pretty good.  One of these days I’ll learn how to not overcook meat, but we eat it so rarely I never quite know what I’m doing.  Still, it was more than edible.  While prepping the gratin, I went into a brief panic because I’d forgotten that it contained parmesan cheese, which my father-in-law doesn’t like.  I couldn’t come up with an immediate substitution, so I added it anyway.  Turns out he’s changed his mind about parmesan, so it all worked out.  My mother-in-law brought a couple tasty desserts (and left us with leftovers!)  The whole thing was very low-key, which just makes me want to host people for meals even more.  As far as hosting holiday meals is concerned, this Easter was definitely a good place to start and a success.

What I Cooked: Easter Edition
Highlights: Date Night & A Sponsor Shout Out
Highlights: Earth Day
Birthdays Galore
Did you enjoy this post? Share it!
« Happy Easter!
Why I’m Still On Week 4 of My Push Up Program »