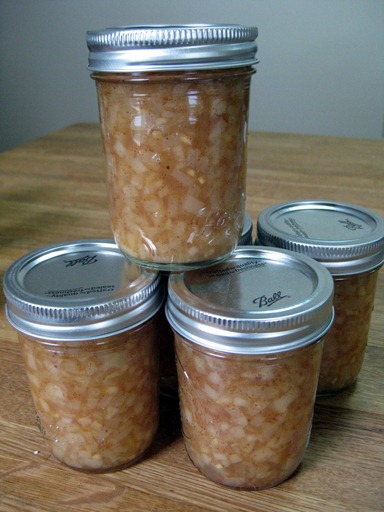 If you were following along this summer, you know that my list of completed canning projects looks like this:

There are a lot of reasons why my canning motivation went down so much once the season really started.  I lost interest in some of the recipes I originally wanted to do.  I got a better handle on what kinds of canned goods Brian actually likes (jams with seeds and chutneys are not high on the list).  We made so many dill pickles that pickled green beans didn’t seem necessary.  Even though I always hope otherwise, canning projects frequently take entire afternoons and sometimes it’s hard to make the time for that.  I decided not to give canned goods as Christmas presents this year.  We need a bigger kitchen.  Still, I think Brian and I are fairly content with what’s been put up for the winter and hopefully next year my motivation will be better.  As far as our household is concerned, canning season is over for the year.

From the looks of my Reader, however, canning isn’t going away any time soon (which is good, because I still need to make good use of these canning supplies).

The Simple Dollar crunched the numbers to find out whether you can really save money by canning.  A lot of it has to do with how much you’re paying for the produce.  Also, I’d argue that its worth it to spend money on things that are important to you, such as local, homemade, organic food.

A piece on Grist talks about the rise of home canning and why Americans are returning to canning their own food.

Food in Jars (my favorite source for all things canning related) has a recipe for Bartlett Pear Chutney with Dried Cherries and Ginger.  Sounds delicious, but I’m not sure what we’d ever do with it.

Also from Food in Jars, an important reminder: it is unsafe to can pumpkin with a boiling water canner.  Disappointing to some, but I’m okay with supermarket canned pumpkin.

From NPR, a story of weddings, canning and blackberries.  Even if I’d been into canning 3 years ago, I don’t think I would’ve canned jam for all my guests.  Then again, sometimes I do crazy things so I might’ve considered it.