A week ago, I started the Vegan for a Week Challenge, vowing to give up meat, eggs, milk, and butter for 7 days.  Here’s my thoughts, in summary: 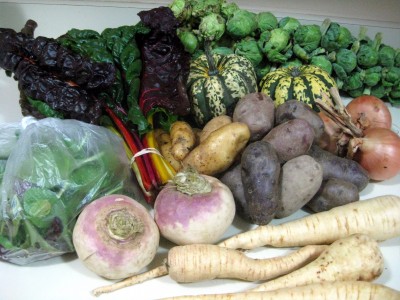 Veganism isn’t right for me.  In order to make such a drastic change in my diet, I’d really have to feel strongly that it was the right thing to do.  I don’t feel that way.  I believe there are serious issues with our industrial food system, I believe homemade is better than store bought and I believe that we don’t need to consume meat or animal products at every meal to be healthy.  But I don’t believe that consuming animal products is fundamentally wrong.  I don’t think that animals are on the same level as people and I’m okay with eating meat occasionally, especially if I know where it came from.  Maintaining a vegan lifestyle with no emotional/moral/intellectual conviction is simply not feasible.

I have a lot more respect for vegans than I did a week ago.  I used to think that going vegan would be easy: a simple matter of getting rid of butter, eggs, milk and cheese but there are animal products in so many things.  Being vegan is work.  This week wasn’t too bad because I only had to plan a week’s worth of meals, we ate a lot of leftovers and I was too busy to think too much about snacking.  But if I was going to become a full time vegan, my pantry would need to undergo some serious changes.  I think I’d have to spend a lot more time cooking and spend more money on substitutes in order to keep some of the flavors I enjoy in my diet.

All that said, I really appreciate the awareness the past week has provided me.  I’m going to try to continue thinking carefully about what I’m eating and including more vegan options in my diet.

Getting to Know Nutritional Yeast
Guest Post: Cynthia’s Simple Polenta Pizza
Let the Vegan Challenge Begin!
Vegan Sausage, Made From Wheat
Did you enjoy this post? Share it!
« Dining Out Vegan (Vegan, Days 5 and 6)
I’m Not Dead! »