Yesterday morning Brian and I made blueberry jam with the berries we picked late last week.  I wasn’t going to write about it because I expected the process to look just like last year’s post, except in our new house.

But life doesn’t often go according to plan, does it?  For the first time in my canning experience, I had jars that didn’t seal.

So I did what any 21st century food blogger would do; I went to Twitter.  All my thanks to Julie and Marisa for quickly replying to my concerns about how long to wait before checking to see if the jars sealed.

How long should I wait before checking to see if my canning jars are sealed? I’m concerned about some. @savvyjulie @foodinjars

@relishments I usually check after an hour or two, just by pressing on the middle of the lid. If it flexes, it didn’t seal!

Out of the 7 jars I processed, there were 3 that didn’t seal.  Unfortunately I can’t remember if those jars were the ones with the old lids from storage or the new lids from the supermarket.  Though that may have had nothing to do with it anyway. 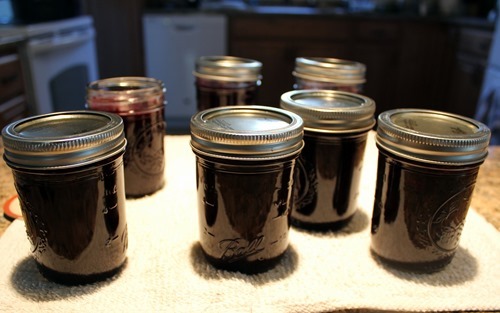 I hemmed and hawed for a little bit about what to do with the unsealed jars.  Reprocessing was an option, but I didn’t want to go through reheating the jam, rewashing and sterilizing the jars and reprocessing.  Also, there was some indication from the internet that the texture of the jam might change if I reheated the pectin.  Ultimately I decided to put the jars in the fridge, for the moment, and I will transfer them to another container today to be frozen.  I’ve never frozen jam before but as Brian and I will be the only ones eating it, if the texture doesn’t quite hold up that should be fine.  I wasn’t planning to giveaway too many jars this year, so the four that did seal should suit our purposes in that realm.

Besides the jars not sealing, canning in the new kitchen went really smoothly.  You may recall that I was worried about the lack of counter space adjacent to the stove, as a full half of our apartment’s counters were on either side of the stove and I did most of my canning work there.  But there was just enough room to fill the jars and it wasn’t a problem to carry them to another area of counter to cool.  I’m not even sure what I was worried about.

Next Stop, Jam
Canning Kick Off 2011
Food in Jars Book Signing
Exploding Applesauce
Did you enjoy this post? Share it!
« Highlights: Summer Vacation
The Time My Sister Gave Me a Kale Recipe »