I have such a love-hate relationship with canning.  It’s mostly love, I think, but it’s so difficult for me to get together the motivation and organization to actually do it.  Part of the issue is that in my house, I don’t can alone.  Canning is much easier when you have a second set of hands to help out.  As a result, the only time I plan to can is when Brian’s available.  There’s also the issue of accessing produce.  Yes, I just wrote a post about having too much leftover produce from our CSA, but most canning recipes require multiple pounds of produce, not just an extra head of broccoli.  Since I don’t grow my own and I don’t frequent farmer’s markets, I sometimes miss out on produce.  This is especially true of produce that isn’t available at our farm at all; I sometimes don’t even realize it’s in season.  I’ve also realized over my few short years of canning experience that we do not consume much of some types of canned goods.  Sadly, I’ve thrown away jars that weren’t consumed within the 1 year guideline.   We’ve figured out what we like (pickles! blueberry jam!) and what we can skip (big batches of other jams, recipes that take a ton of prep work).  In short:  I never do as much canning as I plan to at the start of the season.

And that is why I didn’t do my first canning project of 2014 until yesterday. 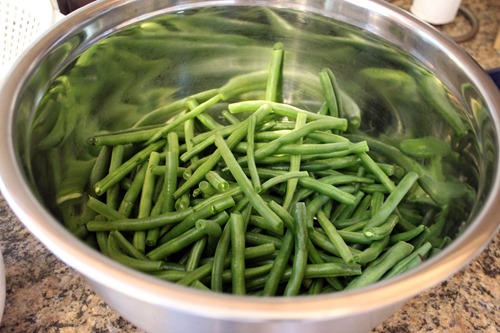 One way to make sure I actually complete a project is to buy the ingredients.  So, last Saturday after checking out a number of tag sales, I stopped by the farmer’s market at the Berkshire Mall and picked up 5 pounds of green beans.  As always, the green beans seemed to increase in volume once we started prepping them for canning. 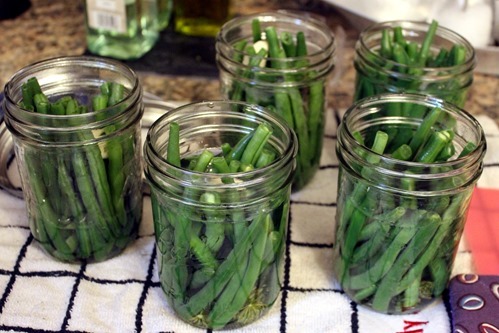 Despite the tediousness of preparing 4 pounds of beans for preservation (yes, I purchased an extra pound), I think pickles are one of the easiest things to can.  The recipe I used this time around, from Food in Jars

, was cold pack, so I didn’t have to cook anything but the brine (and the huge pot of boiling water).  Some of the jars got dill seed, garlic and red pepper flakes; others got fresh dill heads and garlic.  As always, I ran a little short on brine and ended up heating more at the last minute.  The good news is I managed to fit all of the beans nicely in the 10 jars I’d prepared, which never happens.

What did happen was that 2 of my jars didn’t seal.  This happened last summer when we made blueberry jam and I’m not sure what’s causing it.  The lids we used were brand new and most of them sealed.  It’s not a big deal, the non-sealed jars just went into the fridge to be eaten in a couple weeks.  It occurred to me afterwards that I could’ve reprocessed them, which I didn’t do with the jam because I was worried about changing it’s consistency, but it would have worked here. 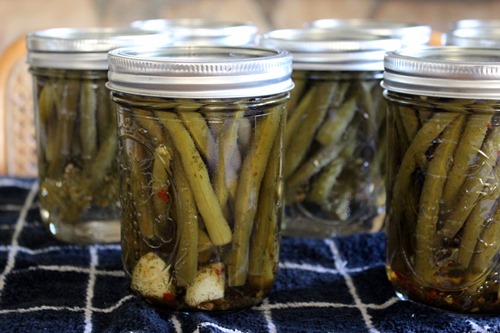 So, there it is.  One project done.  I’d still like to do blueberry jam, but I’m not sure if I’ll get the chance.  I also really want to revisit applesauce, which I’ve failed at twice in the past.  We’ll see!

Getting Carried Away with Canning
#98: Participate in Pimp My Preserve
My Canning List
Berkshire Barter Preserve Swap at the Downtown Pit...
Did you enjoy this post? Share it!
« Photos, Leftovers and More (CSA Menu Plan #6)
Too Busy for Food Photos (CSA Menu Plan #7) »