The 6 days I spent in Chicago, exploring and attending the Healthy Living Summit were awesome.  I am so glad I went.  And now…let the recaps begin.

HLS activities didn’t begin until Friday night, but when I discovered that the Healthy Living Summit was going to be in Chicago, I’d immediately contacted my friend Kirstin, who lives a couple hours outside the city, to see if she wanted to hang out.  She said yes, so I flew out of Albany on Wednesday.  While waiting in the airport, I decorated all of the bathrooms with Operation Beautiful notes. 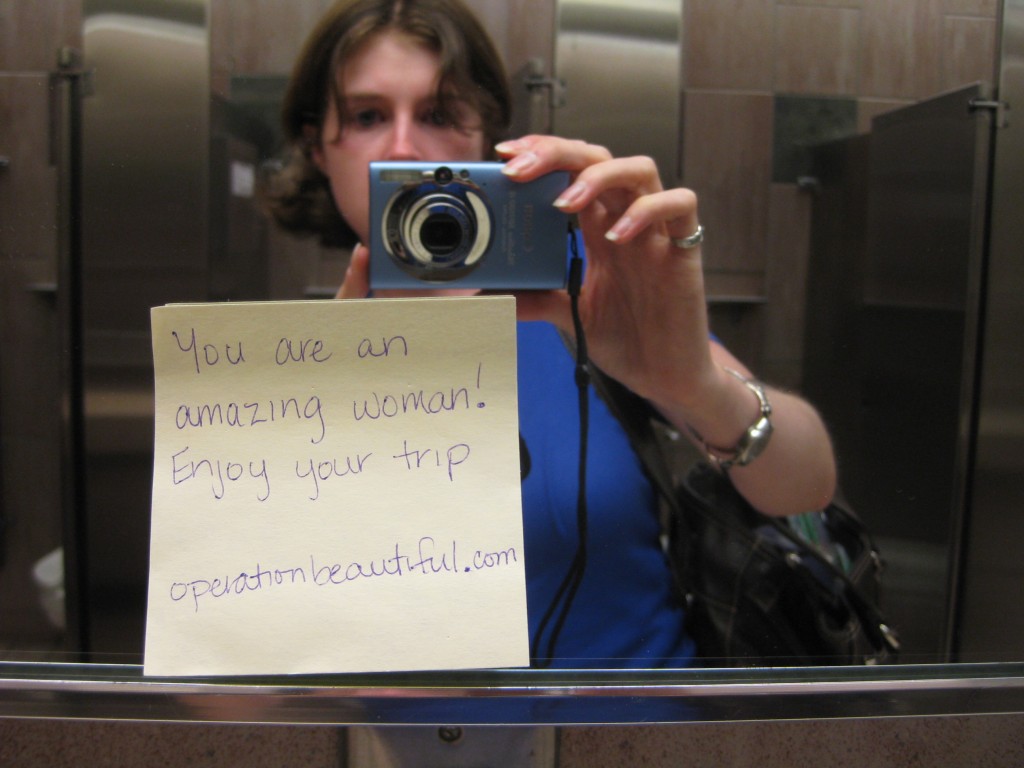 After much debate over cost, ease and economic impact, I took a cab from O’Hare to the Congress Plaza Hotel.  After about half an hour of sitting in traffic and watching the meter go up, I concluded that I probably should’ve taken the “L”.  Oh well, you live and learn.  It took a while, but I made it to the hotel without a hitch.

A couple hours later, Kirstin arrived.  We wandered around the city for a little while and settled on Qdoba for lunch, because we’re cheap and they offer vegetarian options.  After dinner we headed to The Back Room, a tiny live music club of the sort I’d never go to by myself.  But that’s what friends like Kirstin are for.  The music was great and we had a lovely time. 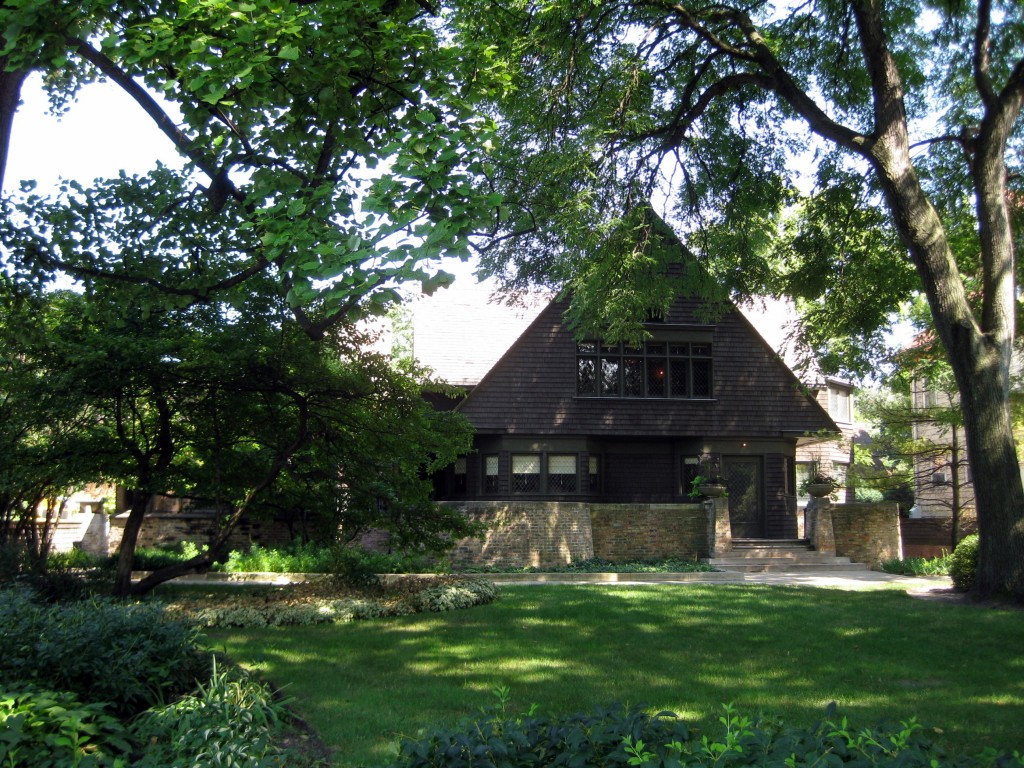 Thursday morning was spent eating breakfast at the Artist’s Cafe (delicious!) and  shopping (Chicago had surprisingly good stores, though I managed to save my money).  After lunch we headed to Oak Park to tour Frank Lloyd Wright’s home and studio.  I was beyond excited about this trip; I’ve been borderline obsessed with Frank Lloyd Wright since I saw an exhibit of his furniture in 2007.  It made my day when Kirstin asked if I wanted to go-I’d initially thought it was too far out of town.  The house was fabulous-everything (windows, furniture, molding, ceilings, art) was intentional and well designed.  Highly recommended. 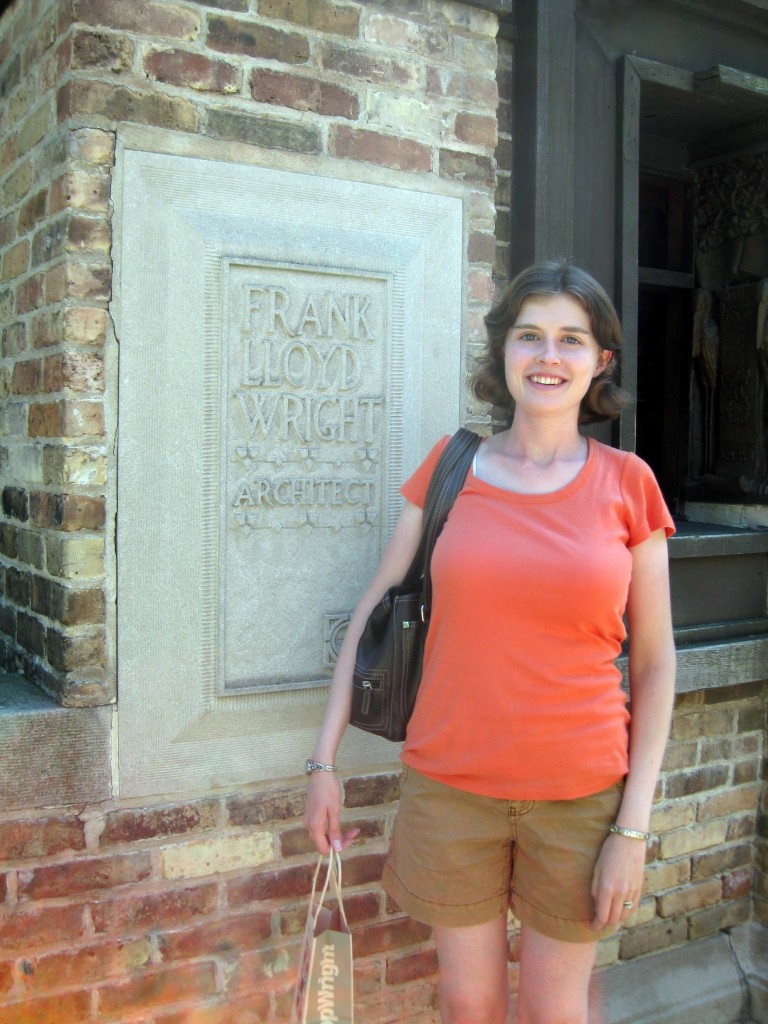 Thursday night, Kirstin earned more major friend points by accompanying 14 of the HLS attendees and myself to Raw, a raw food restaurant in the French Market.  It was the first time I’d gotten to meet any of the girls, including my roommate and it was really fun.  Organic, raw food isn’t usually my thing, but the owners provided us with a whole bunch of samples of amazing food. I’m so glad that Diana organized it and invited us along!

Kirstin and I ended up sharing a bunch of food with Freya, including collard burritos, spaghetti and meatball, ravioli, and a garden burger.  Who knew raw vegan food could be so good?  Kind of mind blowing.

From Raw, we crammed more people than probably safe or legal into a cab and headed to the YumUniverse website launch party.  The party was hot and crowded, but there was free food and beverages (organic wine, acai spririts) and, best of all, free massages.  I wasn’t super impressed with the party (the lines for samples were so long!) but I just took a peak at the website and the recipes look delicious.  Check it out!

We headed home relatively early from the party and headed to bed.  The Healthy Living Summit hadn’t even started yet and I was having so much fun.  Stay tuned for my post about the Frito-Lay plant tour and the rest of my weekend in Chicago!