This weekend, Brian and I took a quick trip to South Bend for a college friend’s wedding.   Since we were headed that way we decided to make a mini-vacation of it and spent a couple nights in Chicago.   Brian hadn’t been in forever and I hadn’t seen Chicago since the 2010 Healthy Living Summit.   The wedding was lovely, the weekend was great and now we’re easing into the summer routine. 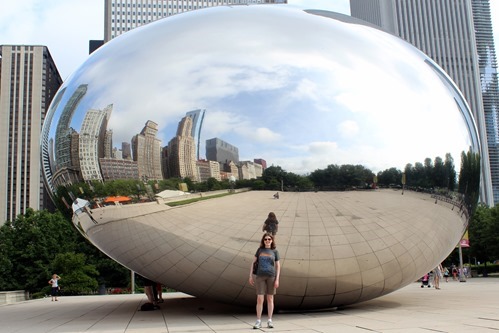 Things I hate about airports, generally and O’Hare specifically
1. The “hurry up and wait” mentality…be early so you can wait in line for security so you can hurry to your gate so you can sit for the remaining 45 minutes so you can hurry to get in line to board 30 minutes before take-off during which time you will sit on the tarmac.  No, thanks.
2. There is a serious lack of signage at O’Hare for the rental car locations.  We probably spent at least half an hour wandering around O’Hare trying to figure out how to get to the rental car place, were given unclear/incorrect directions multiple times and when we finally got there had to wait almost another hour because they were so backed up due to everyone’s flights being delayed on Thursday.

Things that were awesome about our flights
1. No major flight delays, just an hour for arrival and half an hour for departure.  I can live with that.
2. Even though our flight to Chicago was only 2 hours long, there were TV shows (Beat Bobby Flay and Shark Tank) available to watch.  Yes, please.

Decisions I might choose to make next time I travel to that area
1. Flying into Midway.  I’ve flown through O’Hare multiple times before and it was the best deal, but we were not impressed.
2. Skipping the car and using public transportation, though we did drive around a very nice Nissan Frontier for the weekend and I’m not sure how we would’ve worked out the South Bend end of the trip without it. 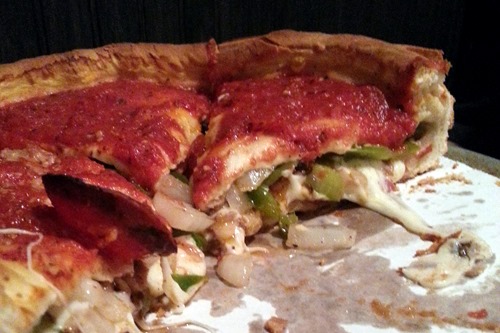 Chicago style foods we made sure to eat
1. Stuffed pizza from Giordano’s, which we ate at 10:40 at night after we finally arrived at O’Hare and found our rental car.  Thank goodness the people at the Rosemont location were incredibly friendly and didn’t seem to care that people, including us, were there after closing.
2.  Chicago-style hot dogs.  I don’t care for ketchup and after a busy morning at the museum we were so hungry.  We purchased our dogs from a food truck just outside the Field Museum and they really hit the spot. 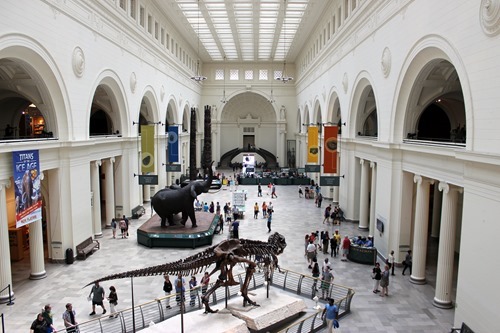 Chicago attractions we made sure to visit
1. “The Bean”
2. The Field Museum, which was my primary motivation for wanting to go to Chicago.  It was even better than I could have dreamed; the place is huge!  We checked out the Chicago World’s Fair exhibit and all the other things we could fit in before we felt overwhelmed.  I may have an obsession with Sue, the Tyrannosaurus Rex. 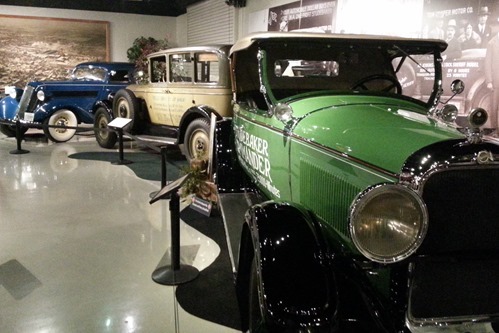 Facts I learned over the weekend
1.  Studebaker cars were manufactured in South Bend.  And you can have your wedding at the museum.
2.  Chicago is on central time.  I always forget this.  Adding to the fun, South Bend is on eastern time.  Math is hard.

Books I added to my “to read” list over the weekend after seeing them in stores
1. The Astronaut Wives Club: A True Story

2. The Lions of Tsavo: Exploring the Legacy of Africa’s Notorious Man-Eaters

(the lions are on display at the Field)

Purchases we made with the rationalization that it was just past our 10 year dating anniversary, almost Brian’s birthday and almost our 5 year wedding anniversary
1.  Spending $25 on a package of mini Vosges chocolate bars in O’Hare
2.  Taking the trip, in general, which included direct flights (see my feelings about airports above), hotels, meals out and the like.  This basically concludes the travel portion of our summer.