A couple weeks ago, I accomplished something I’d been working on since the fall of 2010.  I finally proved to the state of Massachusetts that I had met the requirements necessary to be given a license in special education.  I could write a long post about the over three year process and the frustrations involved with in it, but this is a primarily a food blog.  The new license means a number of things for me, including the security of my position at work, but in terms of the immediate effect, it meant that I had a party to plan.

This party was planned ahead on two fronts.  One: I knew I’d be throwing a party as soon as I got my special education license, whether that was last month or next year.  So, just days after I got the news I invited way too many of my friends to a very casual get together at our place last Friday.  Two: I scheduled the party to begin on a Friday afternoon only half an hour after I was scheduled to leave school for the day.  My goal immediately became to prep as much food in advance as possible. 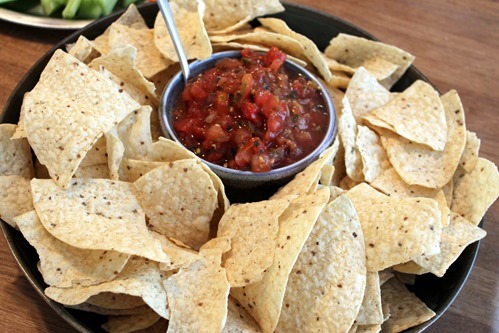 The menu:  Vegetarian Buffalo Chicken Dip, carrot and celery sticks, homemade hummus, Veggie Pizza Squares, various packaged chips and crackers, salsa, cheese slices, popcorn – This menu is extremely similar to the one I served at our house warming in May, and a lot of the guests were the same, but I was totally okay with that.  These are the foods I like to eat at parties, I didn’t have the time/energy/money to make anything fancy and I knew these recipes would work out.  Trying out one new item, the veggie pizza squares, was all of the risk I was prepared to take. 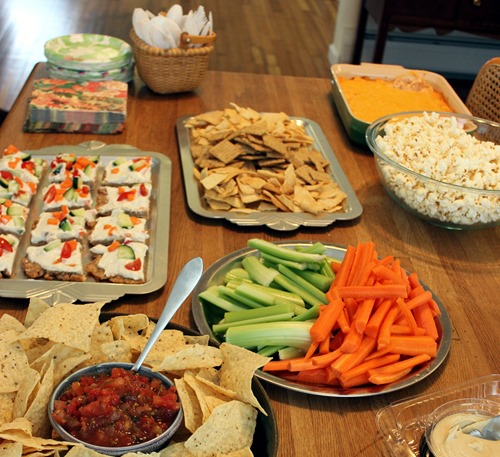 Thursday Prep:  On the night before the party, Brian cut up the carrots, celery and cheese, because he is the best husband ever.  Meanwhile, I made the dough for the veggie pizza and set it aside for its two hour rise.  Next I mixed together the ingredients for a double batch of the buffalo dip and placed them in a large bowl in the fridge.   I could’ve put the dip straight into the casserole dish, but I have this thing about transferring baking dishes directly from the fridge to the oven.  I also mixed the topping for the pizza and put that in a bowl in the fridge.  And, in an effort to make my life as easy as possible the next day, I put all the serving dishes I planned on using and the bags and boxes of chips and crackers on the dining room table.  Before bed, I baked the crust for the pizza and then let it cool overnight. 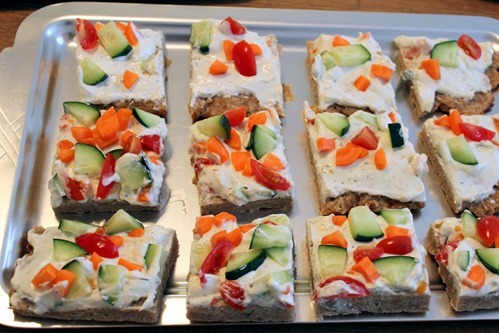 Friday:  In a miraculous and incredibly helpful turn of events, Brian was able to get a ride home from school after his meeting, allowing me the chance to head home almost an hour earlier than originally expected.  And I ended up needing even minute of that extra time.  I immediately preheated the oven for the dip, spread the dip into a casserole dish, sprinkled it with some cheese and put it in the oven.  While it cooked, I chopped up the vegetables for the pizza and popped a batch of popcorn.  And ran around doing a little bit of last minute cleaning. Our first guest arrived at 3:45, fifteen minutes early, and she helped arrange platters with chips and crackers.  Brian jumped in when he got home not long after and we were ready to go when people really started showing up a little after 4:00. 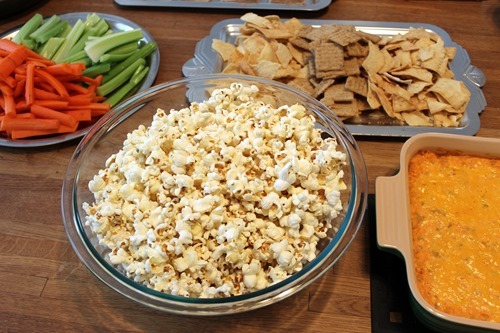 All of the menu items went over really well, despite the fact that we definitely had a bunch of leftovers at the end of the evening.   I was especially glad that the pizza was popular, as I’d never made it before.   Next time I think I’ll use a little bit less of the sauce, but it did taste really good.  Lots of our friends came and we had an awesome evening chatting and snacking the night away.  Now I just need an excuse to do it again…