I’m a Healthy Living Summit veteran; I’ve attended four of the five summits,  every one since 2010.  For the first couple years, I always debated at the end whether I’d make the trip to the next one (and there always seemed to be debate among the organizers whether there would even be a next one), but when it came time to purchase tickets, the decision seemed like a no-brainer.  How could I miss it?

This year’s summit was unique in a number of ways.  It was held in the Midwest for only the second time, in the lovely city of Minneapolis.  This year’s summit was the first one to not include any of the original founding members.  Nevertheless, Julie and Heather and the rest of the Dream Team did an amazing job organizing a wonderful, jam-packed, fun and educational weekend.  However, even though the summit was super organized, I was not.  If you know me well, you know I live for lists and planning ahead.  But with this year’s event happening in September instead of August, I was so involved with school starting I didn’t have a chance to research things to do in Minneapolis, check out the attendees’ blogs, make sure my site looked perfect or even make a packing list for myself.  I wrote my mini-demo the night before and barely got my live blog preview up before I left.  I have never been so unprepared for HLS (or much of anything else, for that matter).

Still, I made it to Minneapolis without any problems.  The light rail trip from the airport to the hotel was one of the easiest and most pleasant public transportation journeys I’ve ever made with luggage.  I had just enough time to settle into my hotel room and meet one of my roommates, Stephanie, before heading to Chino Latino for dinner with a mix of 13 old and soon-to-be-new blogging friends.  As I mentioned in last Tuesday’s post, the food there was amazing and it was so great to be in the presence of some of my favorite people again. 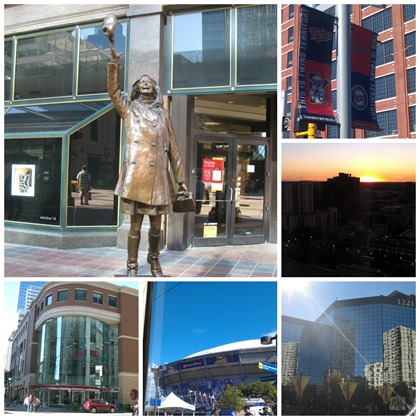 One of the drawbacks of HLS being held in September is that I didn’t get to explore Minneapolis as much as I ordinarily would’ve in the summer.  Even though I flew out on Thursday, HLS-related events were in full swing by the time I arrived.  I did enjoy wandering the area near the hotel; Target headquarters and the biggest Target store I’ve ever seen were just around the corner. How could I resist?  Shocking, I left the store without spending a dime, but that was mostly because I wanted to make sure I had room in my suitcase for all the summit swag I was going to be bringing home.  Seeing the Mary Tyler Moore statue was really neat, especially since I stumbled upon it accidentally.  On Friday afternoon, following my mini-demo and a lunch from Panera, a small group of bloggers and myself ventured to Fulton Brewery, which allowed us a view of some parts of the city that were farther away from the hotel.  The folks at the brewery were super nice to us, even after we all whipped out our cameras the instant the beer samples hit the bar.  I was the only HLS veteran in the group and it was really encouraging to share a few hours with bloggers who were newer to the community. 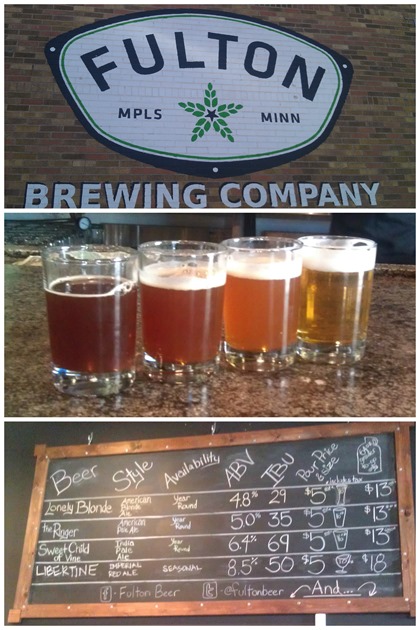 The summit itself was awesome.  My Friday mini-demonstration on IFTTT went really well, though it became very apparent that when given extra time I am prone to ramble.  I think it’s the teacher in me; trying to make the class last until the bell rings.  Regardless, it seemed that many of the 15 or so who attended the mini-demo session had never heard of IFTTT and I was so glad to be able to share it with them.  I also really enjoyed Katie from Peace Love and Oats’ presentation on PicMonkey – I think I’ll be making a lot of use of that site in the future (including excessively in this post).  The cocktail party venue was beautiful and though I initially arrived feeling physically not awesome, I found myself quickly feeling better and had a really great time meeting the other attendees.  A “find your match” ice breaker game forced us to talk to new people; I had to find the person assigned the “George” card that went with my assignment of “Martha”.  I made the most of the photo booth (which I infamously hated at 2010’s summit) even though squeezing myself, Stephanie and my other two roommates, Stephanie and Katie, into the booth was quite a feat.  And no, that wasn’t a typo, I had two roommates named Stephanie.  Saturday’s sessions were great.  I attended talks on growing my own food, using my blog to get my “dream job” (even though I love my job) and soaked up info about adding videos to my site.  Live blogging Katie and Mary’s session on Blogging with a Cause went better than I ever expected and I’m still thinking about some of the ideas they shared. 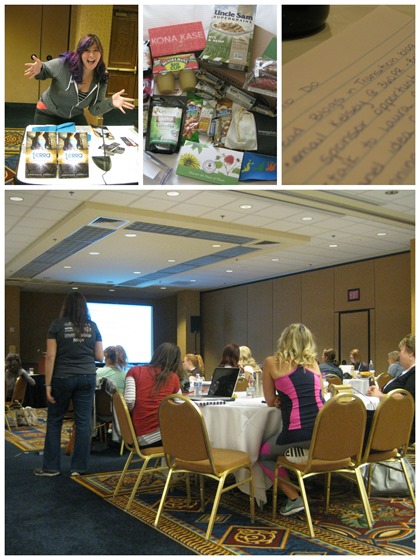 Sunday morning was a little more rushed than usual, as I was flying out of Minneapolis at 1:30 that afternoon.  Still, I made it to the 5k fun run/walk which culminated at the the Minneapolis Sculpture Garden, home of the famous spoon and cherry sculpture.  The route was pleasant and I enjoyed that a large portion of it was through parks.  Upon my return to the hotel, I enjoyed yet another delicious meal (the food this year was awesome!) and helped myself to a chair massage provided by the Minneapolis School of Business.  Before long, it was time to stuff the last of my free goodies into my suitcase and get back on the light rail to the airport. 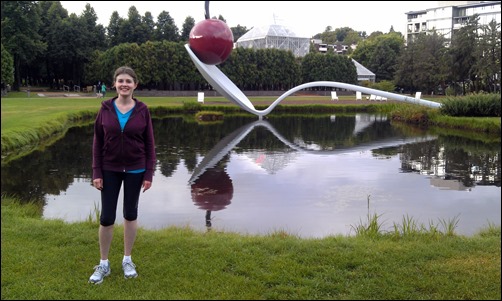 The sponsors at HLS 2013 were the most generous of any I recall from past summits.  They came with tons of free products to sample and take home.  I don’t know if it was the quality of the sponsors this year or my personal journey with seeking advertisers for this blog, but I had some really great discussions about site sponsorships and getting involved with brands I love.  Special thanks to Wild Harvest, Musselman’s, Sargento, Ninja, Blue Diamond, Driscoll’s, CocoaVia and 360 Public Relations for being especially wonderful. 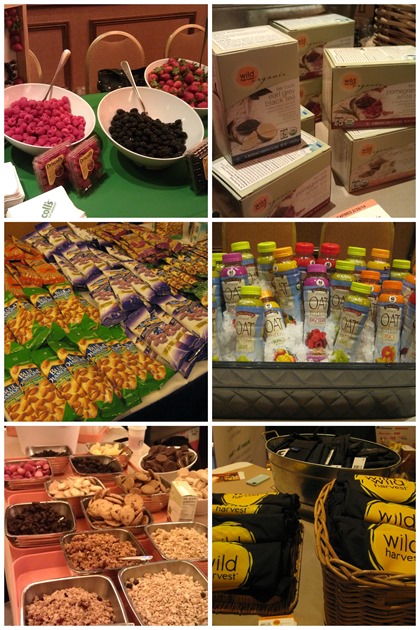 My weekend in Minneapolis reminded me of the importance of taking care of myself.  For whatever reason, I didn’t feel great for most of the weekend.  I don’t know if it was the amount of water I was (or wasn’t) consuming, the food I was eating, the level of stress (I was presenting and live blogging for the first time!) or the start of school exhaustion, but I just did not feel like myself.  I made it a priority to take it easy, make smart choices about what to do with my time and put into my body.  By the time I returned home, I felt fine on the digestion front, though I did quickly contract a cold from my students/husband.

I have made a lot of real life blogging friends through the Healthy Living Summit, but this year’s event was attended by more new (to me and to blogging) bloggers than I recall other summits having.  At first, this scared me a little.  Finding myself as an “old” blogger and veteran of HLS still seems odd to me and I knew HLS wouldn’t be the same without many of the usual suspects.  But in the end, it didn’t matter.  It’s so inspirational to meet people who are new to the blogging scene; they ask good questions and have creative new ideas and don’t carry around some of the baggage related to some of the drama that has occurred in the healthy living blogging community over the past five years.  It’s so exciting to be part of an event that has grown and changed over the past five years.  The bloggers behind HLS never seem to be satisfied with what they’ve done before and it just keeps getting better as a result.

Even though September summit’s make me a little crazy (and put me so behind that it takes over a week to get a recap of the event up…and I still haven’t caught up on grading), I’m definitely planning to be in attendance at HLS 2014.  For the first time ever I’ve even brainstormed a couple session ideas I’m thinking about pitching to the folks in charge.  The dates and location for the next event were announced at breakfast on Sunday: September 11-14, 2014 in Madison, WI.  Will I see you there?

As last week was super busy (catching up on things at work + meetings every night of the week) and I’ve just gotten rid of that cold, I still haven’t gotten a chance to read the recaps of the sessions or visit the blogs of the new friends I made.  I haven’t even made the time to look at the to do list I created during HLS as  I was inspired during the sessions.  Maybe now that I’ve finally gotten this post written and things seem to be getting back to the regular routine, I can start to tackle that to do list, follow the blogs of my new friends and get back to work on this site.

Celebration Week: Terra by Gretchen Powell Giveawa...
HLS: Thoughts a Week Later
I’m Home!
TECH: If This Then That
Did you enjoy this post? Share it!
« Twosday: HLS 2013 Edition
29 Superlatives for a Birthday »