My usual breakfast is a cup of tea and then some sort of carbohydrate: a bagel and cream cheese/toast and jam/oatmeal.  Often I make my bagel or toast and take it with me to work, eating it as I get organized for my day.  Despite how lame that is, I really do like breakfast.  I love breakfast sandwiches and eggs and frittatas and the occasional pancake or waffle.  This week as I was planning my menu, I asked Brian what he’d like for dinner.   Inspired by our recent Netflix-fueled Scrubs marathon, he replied “Brinner” (breakfast for dinner).  Now I’ve got breakfast on my mind: 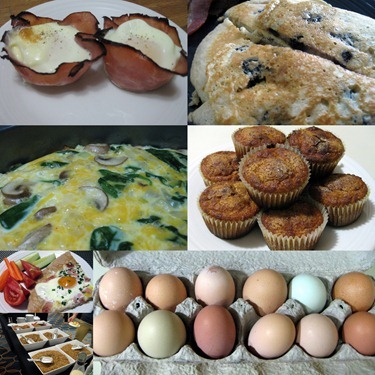 breakfasts I have known and loved

A post on Serious Eats suggests combining 2 McDonald’s menu items for the “best” way to eat breakfast at McDonalds.  Why has it been so long since I’ve had a breakfast sandwich?

I just found out that September is National Biscuit Month! (Thanks, CNN’s Eatocracy)  Thank goodness there’s still almost a week left this month for some biscuit eating action.    The article has a whole list of tips for creating the perfect biscuit, but I didn’t do any of them when I made biscuits last week and they turned out fabulous (and only took like 20 minutes, tops).

The Donut Man in California has been serving donuts for 40 years.  I’m especially intrigued by the seasonal fruit filled donuts mentioned in the video.  Maybe a trip to California is required?

I never would’ve thought to put quinoa into an omelet (let’s be honest: I still haven’t even made quinoa, so I haven’t thought to put it in anything), but this recipe for a 3-Egg Omelet with Quinoa, Sun-Dried Tomatoes, Spinach, and Goat Cheese from The Kitchn sounds delicious.  They also have a post featuring other quinoa for breakfast ideas.

Confession: despite a discussion about it at HLS and possessing several links to recipes, I have never made a tofu scramble (for people like my mother who don’t regularly have conversations about tofu, that’s like scrambled eggs, but vegan).  However, Janel’s post about a vegan zucchini frittata makes me want to try substituting tofu for eggs, even if I don’t make it a regular thing.

Confession #2: I don’t really like cereal. I’m pretty sure it’s closely tied to the fact that I also don’t care for the taste of milk.  Once in a while I’ll grab a handful of dry Chex or something for a snack, but I can’t stand the smell of Cheerios and most cereal just doesn’t interest me.  However, if you’re like almost everyone else on the planet, including my husband, you probably really enjoy cereal.  For you, Serious Eats has created a YouTube playlist of videos composing “nearly half an hour of breakfast cereal-related parodies, commercials, and more”. If that’s not enough cereal, you can read this post from Huffington Post’s College section about the 7 healthiest cereals.

Chow has 6 hot breakfast recipes that can be made in 15 minutes, including breakfast nachos.  Yes, please.

According to the Chicago Tribune, weekends are made for eggs.  That’s perfect because this Potato, Chorizo and Green Chile Omelet from Food Republic sounds awesome.

My HLS roommate and friend Kristin recently posted a recipe for Carrot Buckwheat Pancakes.  I’ve never worked with buckwheat, but these pancakes sound like a good place to start.

I’m still not over my pumpkin overdose from 2 years ago (although I have managed to consume a couple of pumpkin donuts, so I guess I’m nearing recovery).  These Brown Butter Pumpkin Muffins from Savvy Eats might just be the thing to get me interested in pumpkin again.

Highlights: Saint Patrick’s Day 2014 & A...
Highlights: Time Management
Highlights: Convenience
Highlights: Winter Squash
Did you enjoy this post? Share it!
« This Week
Pictures From a Day at the Big E »