You may recall my mentioning that we got rid of our microwave at the end of April.  Right before I left for Montreal, we discovered that some ants had taken to living in our pantry.  After evicting the ants, we discovered that they’d especially taken to living inside our microwave and were less interested in leaving their new abode.  And so, after a series of texts between Brian and I while I was in Canada, it was decided that the microwave needed to go.  I was a little sad about the loss of our microwave, mostly because it was older than Brian (really!) and I wanted to see how long it could last for.  But though it’s death wasn’t of “natural causes”, we decided not to replace it. 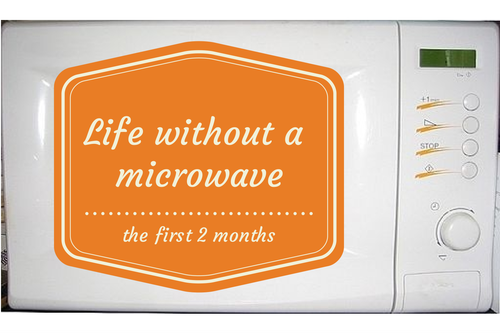 We’d been talking about getting rid of the microwave for a long time.  It had been agreed that, when the time came for our microwave to go, we wouldn’t replace it right away.  I’ve read some articles about the dangers of microwaves, but the decision was more based on the fact that I just wasn’t sure that we really needed it.  We just weren’t using it often and it seemed to make sense to try life without it.

The result?  So far, so good!  There have definitely been some moments when I’ve wished we still had a microwave…to melt the butter I forgot to soften for muffins, to warm up the tea I didn’t get a chance to drink, to reheat the leftover lasagna.  But know what?  The alternative methods are not that big a deal.  Yes, life without a microwave takes extra time, but the adjustment has been surprisingly uneventful.  I can let the butter sit out for a few hours…or make something else…or put it on the top of the warm stove.  I also saved this article about softening butter that I’m sure will come in handy.  I’m also becoming increasingly comfortable with reheating on the stovetop and in the oven.  We often skipped the microwave for reheating before, but now we don’t have a choice.  Sometimes the results are actually better than in the microwave, sometimes not so much.  The first time I attempted to steam frozen edamame, the results were much mushier than one would prefer.  But the second time, I cooked them for a shorter amount of time and they were great.

We continue to have no plans to replace the microwave.  We’re approaching this “no microwave” experiment the same way we’ve been approaching having one car for the past couple years.  We will do so until it no longer makes sense.  For now, life without a microwave makes sense.  We’ll see if I’m still singing the same song in a few months when it’s a million degrees outside and I have to turn on the stove in order to cook anything.

Kitchen Tools I Could Not Live Without
Highlights: Kitchen Accessories
Cleaning out your kitchen
The Pantry Project
Did you enjoy this post? Share it!
« Strawberry Season!: CSA Menu Plan #2
To Do: Summer 2014 »