During our house search, I was constantly distracted by the kitchen of every home we looked at.  The kitchen in our apartment was making me crazy — too little counter space, hardly any light and the lack of storage meant that some of my kitchen items were overflowing into the dining room.  If we were going to buy a home, it had to have a kitchen I would love working in. 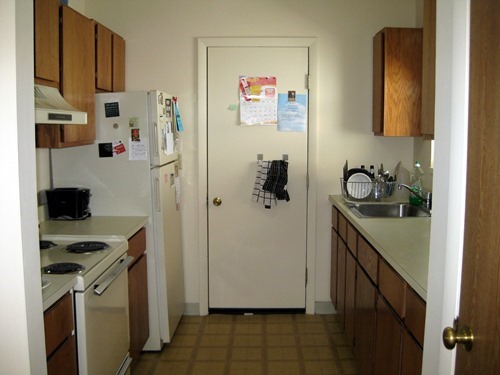 It’s a little funny to think about how frustrated I became with the apartment kitchen because I was so excited when we initially got the apartment.

But when I saw the kitchen in the house we ultimately purchased, I fell in love all over again. 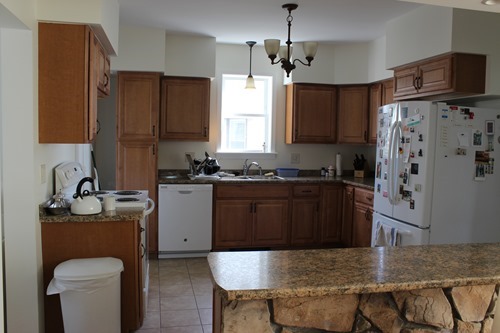 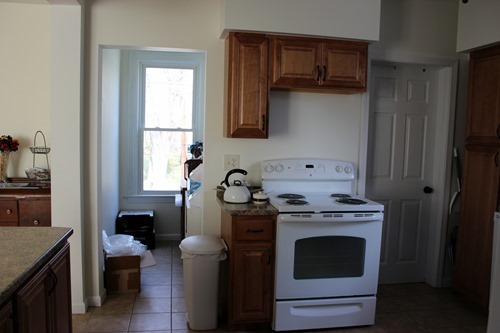 My 5 favorite things about this kitchen:

The dishwasher! – Washing dishes is pretty high on my list of tasks I abhor and since I tend to produce a lot of them, it seemed like I was spending a lot of time in front of the sink.  It’s taking a little getting used to and my lack of spatial awareness means I’m still figuring out the best way to load it, but it is such an improvement.

The counter space! – The number one improvement I was looking for in a new kitchen was more counter space.  In the apartment, I barely had room to roll out dough some days (especially as I tend to attack multiple cooking projects at once).  I love the peninsula in this kitchen; it’s a great workspace and so far we’re keeping it pretty empty of clutter.

The pantry! – This space is still very much a work in progress, but I love it already.  Eventually I’d like to get nice looking floor to ceiling shelves, but for now it’s wonderful to have the microwave out of  the way and a place to store the items I don’t use on a regular basis.

The stove! – Our house didn’t come with appliances, so we went shopping the day after we closed.  We stuck with pretty basic appliances we knew would get the job done.  The stove in our apartment was the absolutely most basic model possible, and who knows how old, so I’m in love with the  features I never had before.  My new stove has a clock, digital temperature controls, and a window.  No more opening the oven to see if my bread has risen!

The light and space! – Brian and I did a lot of bumping into each other in our old kitchen.  Having some room to move around and work is such an improvement.  I also love how much light comes into the kitchen and the fact that it opens directly into our dining and living rooms.

This kitchen is still very much a work in progress.  I’m still rearranging items as I realize that the place I put them didn’t work.  Even though this kitchen seems infinitely bigger than the one in our apartment, it filled up fast and some of the ways I used to store things no longer work.

Things I’m still getting used to:

Where everything is – We’re 3 weeks in now and I still wander aimlessly around my kitchen in an effort to remember where things are.  I don’t actually open the wrong cabinet often, but I constantly change direction in the midst of getting something because it isn’t kept where I’m headed.

The lack of work space next to the stove – In our apartment, I did a lot of prep work in the space right next to the stove.  Here, I don’t really have that option.  I’m a little bit concerned about how I’m going to work things when canning season arrives.

The garbage disposal – On the other hand, I am not used to having a garbage disposal.  It’s just not something I’ve ever had before.  I’m a little scared of breaking it and/or my fingers.