Lately I’ve been including brief reviews of the recipes I made the previous week along with my weekly menu plans.  Short reviews are great, but this past week I had incredible success with 2 of the recipes I tried out and it seemed fitting that they receive a little more attention.  I’m so pleased that I was able to spend some real time in the kitchen last week and finally make some new recipes; the past several weeks just haven’t lent themselves to that as much as I’d like. 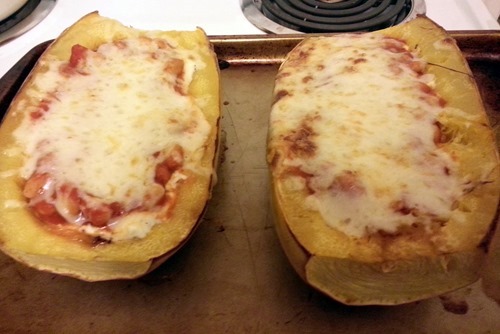 In the past, I’ve made a few different successful spaghetti squash dishes.  But when I saw this recipe pop up on Ari’s Menu I couldn’t wait to try it.  Spaghetti squash is available from our farm at the beginning of fall and I’m trying to make the most of it while it’s around.  Plus I love lasagna.  As there are only two of us, I immediately halved the recipe, using only 1 good size spaghetti squash.  I followed Ari’s instructions for cooking the spaghetti squash.  For the filling, I knew I didn’t want to use meat, despite the fact that it sounded delicious.   So I heated about 12 ounces of jarred tomato sauce and a 15 ounce can of cannellini beans in a small pot on the stove.  When it came time to fill the squash halves, I followed the instructions of adding the cottage/ricotta cheese mixture, followed by the sauce and beans and topping with the shredded mozzarella.

I cannot wait to make this dish again.  With the possible exception of cutting the spaghetti squash in half (which scares me, so I always make Brian do it), this recipe is so easy.  Yes, it takes some time because the squash has to be roasted, but that time is completely hands off.  The flavor was amazing and I felt good about eating a meal that was grain free but didn’t taste like a pile of vegetables.  The rich, cheesy, satisfying flavor of lasagna was definitely present.  We may be eating it for lunch again this week. 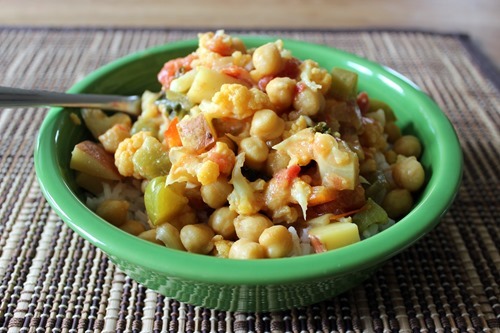 Curried Vegetable and Chickpea Stew from The Kitchn

After reading through this recipe and discovering that it required some work on the stove top and only 4 hours of cooking in the slow cooker, I decided to make the stove top variation.  I don’t regret that decision one bit.  I started the recipe as written, in my 5 quart Dutch oven.  When I reached the part of the recipe that said “pour this onion-potato mixture into the bowl of your slow cooker”, I just ignored it and added the rest of the ingredients to the Dutch oven.  All of the vegetable ingredients, with the exception of the canned tomatoes, were available at our CSA, which was awesome. After 40 minutes of simmering the covered pot, I checked the stew and found that the potatoes were done.  At that point I added a few handfuls of chopped kale because that’s what I had on hand from the farm and a can of coconut milk.

Brian and I were both really happy with this recipe.  It looks like we’ll end up getting about 8 servings out of it.  The first night I served the stew over some barley, since then we’ve enjoyed it atop rice.  The number of servings you’ll get will vary based on your stew to grain ratio.  We found that this recipe definitely tasted like Indian curry, but it’s not spicy.  You could certainly up the spice level by using hotter curry or adding more cayenne.  I like spicy food, but as we’re eating this for several meals I don’t want to be repeatedly overwhelmed by heat, especially during lunch at school.

Needs Work:Rach’s Creamy Pasta with Spinach ...
New Adventures: The Best Recipes I Tried in May 20...
Dinner, in Brief
Recommended Recipe: Crook’s Corner Shrimp an...
Did you enjoy this post? Share it!
« We Have a Winner
Highlights: Autumn Eats »