There was a time when I would’ve gone all out for Easter dinner – lots of menu planning and decor and trying of new recipes.  I get so few opportunities to host holiday meals and I like to make the most of my chances.  Several years ago we did have a couple friends over for Easter, but that was a very casual affair.  In 2012, we hosted my friend Cynthia and her husband for this meal and in 2011 my in-laws joined us, but that’s about the extent of my Easter cooking.

But the time for fancy Easter meals has come and gone (though I’m thinking it’ll return in the not too distant future).  Nevertheless, we decided about a month ago to invite some of the college students who attend our church to join us for Easter dinner.  I was excited, but not motivated to plan anything too extravagant.  Constrained by time, a lack of knowledge about how many students would actually end up coming, and the notion (but not a terribly strong conviction) that I should actually stick to my grocery budget, I came up with the following menu:

On reflection, this was a very good idea.  Originally, the menu didn’t include much of an appetizer, but by the time dinner was ready, the students (who had come home from church with us) had been hanging out, playing Code Names, for over 2 hours.  We all ate our fair share of snacks before the main meal. 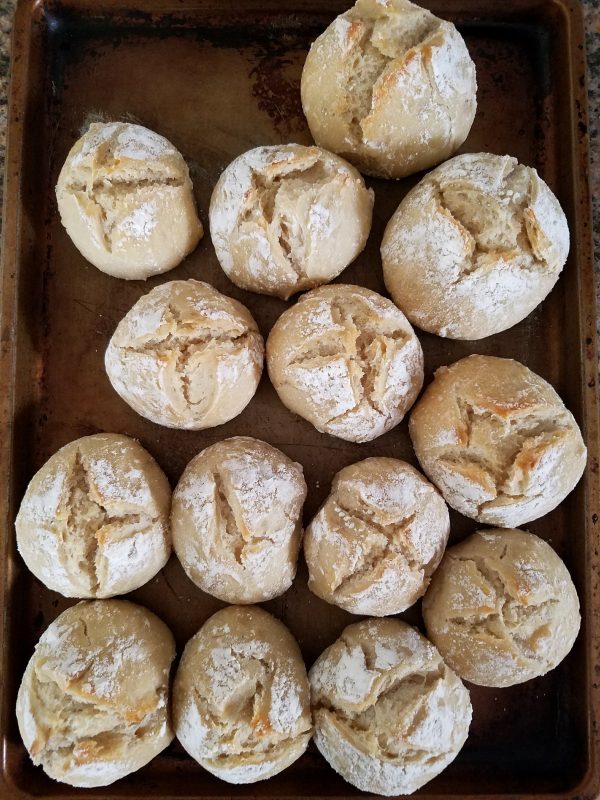 It’s no secret that I love baking and, once again, I turned to Artisan Bread in 5 Minutes a Day to help me out.  I used the master recipe and followed the book’s directions for making rolls instead of loaves.   I made 24 rolls, but only warmed up 14 of them.  At the end of the meal, about half of those remained.  I could’ve made less, apparently, but leftover rolls are a problem I’m happy to have.  To accompany the rolls, we made a very basic compound butter of salted butter and chopped chives. 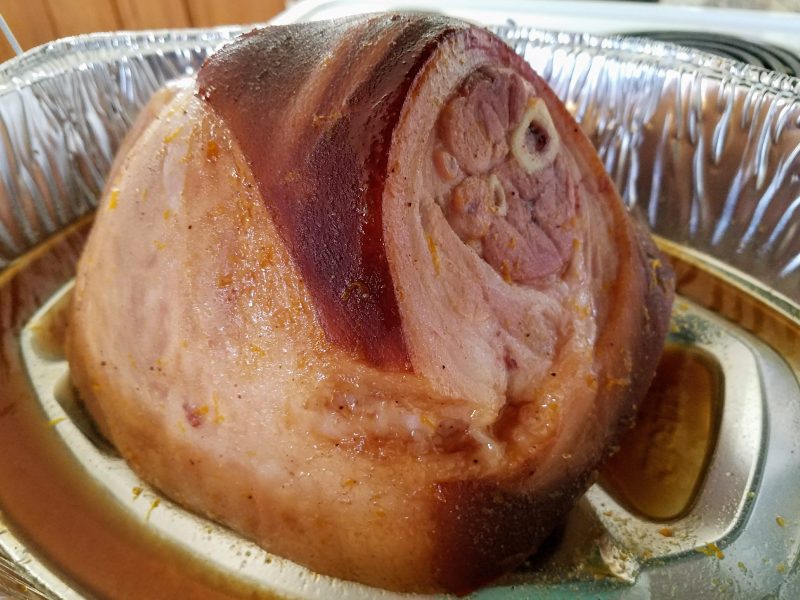 I’d never baked a whole ham before and I did no research before I went shopping.  I still don’t know what the best kind of ham to get is, but I can tell you this was a relatively cheap one.  I did do a bit of research before I started cooking; I followed this guide from All Recipes and cooked the ham for 90 minutes, basting it with this honey glaze every 20 minutes.

In the end, the ham turned out okay.  Generally, ham isn’t my favorite anyway and this one probably would’ve benefitted from a bit more time in the oven.  It also had a decent amount of fat.  We ended up with a lot of leftovers (we started with an 8-pound ham), but they’ve served us well for lunch and dinner this week. 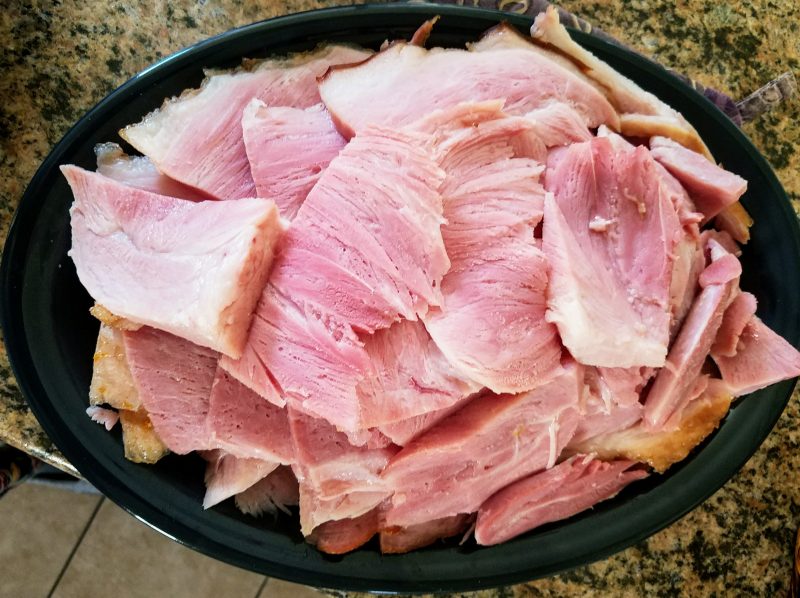 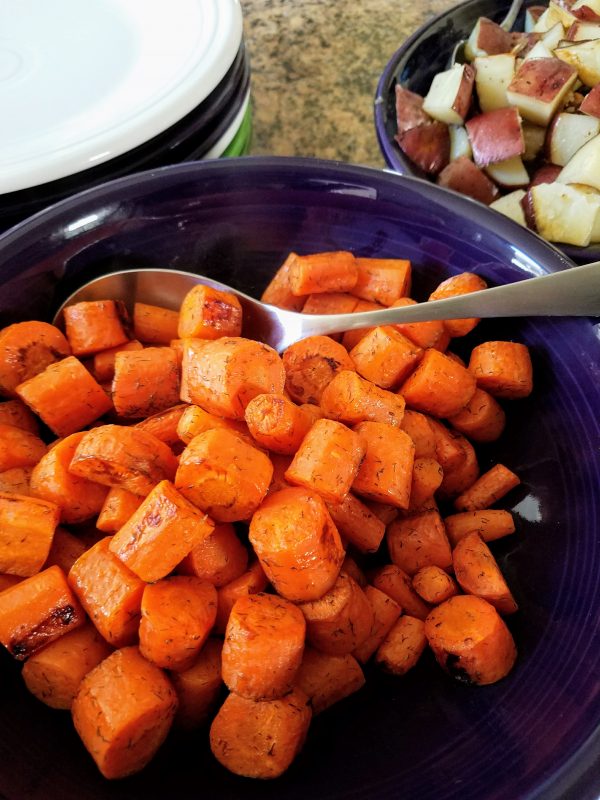 I made about 4 pounds of carrots by slicing them into thick coins and tossing them with olive oil, salt, pepper, and dill.  After about 30 minutes in the oven, they were ready to eat.  We encouraged the students to take home leftovers and none of these remained in our house after we took the students back to campus.  All that to say, they were a hit. 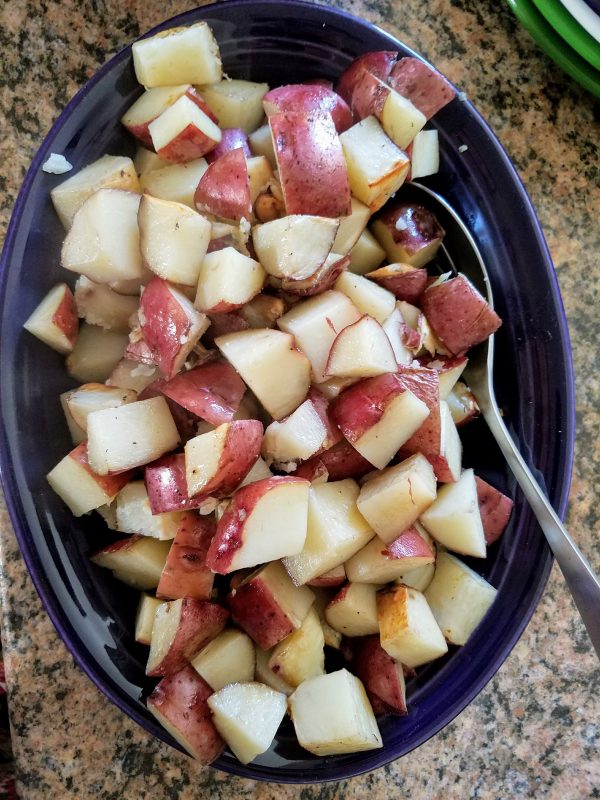 Another side that was within the realm of what I often make anyway was these roasted red potatoes.  Here too, I tossed the potatoes with olive oil, salt, pepper and garlic powder and roasted them for about 30 minutes.

I made a 5-pound bag of potatoes (can you tell I’m not used to cooking for more than 2 people and had no idea how much food to make?) and about half of that remained after our dinner. They’ve served us well in our lunches this week and Baby E is a pretty big fan of them, but next time I’ll definitely make less. 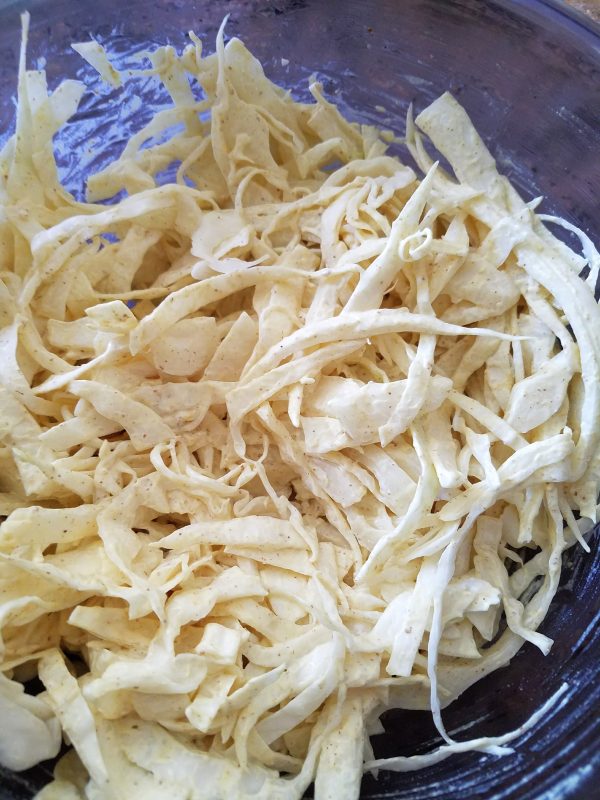 I was definitely concerned that there wouldn’t be enough food (ha!) and I wanted another side available.  We still had cabbage in the fridge from our last CSA pick up and I thought it would be a nice crunchy companion to the other foods on the table.  I used the sauce from my Kohlrabi and Cabbage Summer Slaw recipe, and all of this was eaten or taken for leftovers as well.

Dessert was a little bit of an afterthought.  A couple days before Easter, I settled on making this Chocolate Chip Bundt Cake, but then I stumbled upon this Lemon Bar mix from King Arthur Flour at the supermarket.  The Big Y sale + an ibotta rebate + the fact that Brian loves lemon bars was enough motivation to try them out.  I was happy with the mix and really pleased that I decided to go that route instead of making another dish from scratch.

Another bonus of hosting Easter dinner was the opportunity to actually use some of my servingware.  I have some great Fiesta pieces that coordinate with my dishes, but I literally never get them to the table.

So, that was our Easter.  This is one of those moments when I’m really glad I have a blog, because I bet this post will come in handy in the future when I’m responsible for a holiday meal again.  I hope you find it useful as well!

If you have simple, crowd-pleasing Easter recipes I should try next year, send them my way!