Yesterday I headed into New York City with Brian’s family.  The plan was to check out the Museum of Art and Design, get lunch and do a little walking around.  We decided to eat lunch at Bouchon Bakery, a bakery co-owned by Thomas Keller in the Time Warner Center.  The sandwiches looked mighty tasty and seemed like a reasonably priced way to eat something from Thomas Keller (as opposed to going upstairs to Per Se).

But it wasn’t really the sandwiches that attracted me-it was the French macaroons.  For those of you who do more constructive things with your time than reading food blogs, the French macaroon is a almond and meringue pastry with a buttercream frosting, more like a cookie than the coconut macaroons most Americans think of. Macaroons have been labeled the next “it” dessert (replacing cupcakes), but I’d never have the opportunity to try one.  They’ve been on my mind even more so lately, since Julie and others have attempted making them for Macaroon Monday. 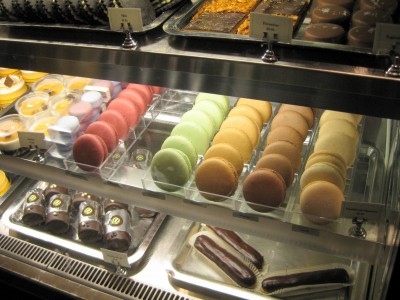 Originally, I was only going to try one.  But by the time we’d reached the counter, Brian had decided to get one of each of the six flavors (He also purchased one of those incredible looking chocolate “Ho-hos” on the left side of the bottom shelf–it was as rich as it looks).  We shared our purchase with his family.  His mother said the flavor of the pistachio was wonderful and his dad really enjoyed the cranberry pomegranate.  I started out with the vanilla which was incredible-real vanilla is such an great flavor and I loved that you could see the black specks of vanilla in the buttercream.  Brian sampled the caramel, which also measured up.  After we got home, we consumed the pumpkin and the chocolate.

The texture of macaroons-crispy on the outside, soft and rich on the inside-is really impressive.  I don’t think I could replicate it.  We liked the caramel and vanilla the best, but the pumpkin had really impressive, almost pie-like, texture. 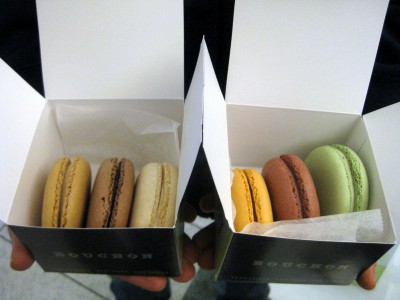 Will I be making macaroons?  Highly unlikely.  Will I purchase them if/when I see them in a bakery in the near future?  Definitely.